Bits and Bytes: Ratchet and Clank make PS3 worth it


I have to be honest here. I bought a PS3 this summer because I got one brand new for way below retail thanks to someone's kid not paying his parents for it (after they held on to it for months) and I wanted one with the emotion engine so I could play any PS1 or PS2 game that I have without worrying about emulation (or lack of any emulation) problems. The thing is, I didn't really play the thing too much. I played around with some “Motorstorm” and thought it was ok. I bought and ripped through Ninja Gaiden Sigma (although I've beaten the game on the Xbox before). I played Marvel Ultimate Alliance and had a decent time with it. 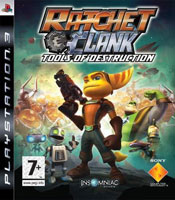 There was practically nothing that I wanted to play that I hadn't played, or couldn't play, on my Xbox 360 (need those achievements, you know). Thank goodness for the holidays because I've now played through two excellent games and I am here to give my brief review on both of them (over two issues). Here's the first game:

Ratchet and Clank: Tools of Destruction

This is actually my first taste of the Ratchet series and now I'm wondering what I've missed with their older games. This run and gun platformer is a hell-of-a-lot of fun. The story of heading out to find out what happened to Ratchet's people and to save the galaxy from a villain that has a super weapon seemed a little cliché, but the great part of the game is actually DOING it.

The game gives you over 20 different weapons to use to tackle the game however you want. The game is stilly pretty much linear, but you can use any sort of weapon or combination to get through the levels. Not only that, but the weapons (and your armour) can be upgraded to a fifth level that provides you with some amazing power (and visuals).

Speaking of the presentation, the visuasl are crisp, clean and colourful. This game looks almost like a CGI movie coming to life. I couldn't imagine how much better this game (and the next one I'm going to touch upon next week) would look on a huge LCD 1080p TV. The sound effects are also great and accent the game's cartoon feel.

There are hidden items in the game that will have you going back for more, as well as the option of playing the game with all the weapons that you've powered up the first time through. I actually found myself playing through the first two levels after I finished that game without actually realizing what I was doing. That's how much fun I had with this.

As the PS3 is now lower in price and people are picking them up, I have to say that this game is one that you have to pick up. Hardcore gamers will love the challenge of trying to find every secret and power everything up, while casual gamers will love how accessible the game is and how the challenge is “just right.”

I'll give this one a nine out of 10. It made me smile and kept me glued to my PS3...even though Rockband, Guitar Hero 3, Super Mario Galaxy AND Halo 3 were calling my name.