The rise to the top of the MMA world starts in the small gyms around town, and that couldn't be truer then what's been happening right in our own backyard over the past couple of years. 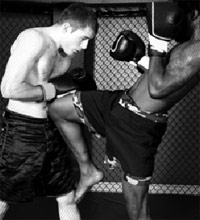 With the experience these fighters have already had, especially at a young age, they have evolved from their roots at the world famous Team Tompkins and have made a continuation of the gym started by Shawn Tompkins by opening up the Adrenaline MMA Training Center.

It wasn't easy leaving the old gym, but with the growth of the sport of MMA in general, that has translated into a large growth at Team Tompkins and now Adrenaline MMA and with such growth, and because of the Tompkins and Adrenaline names, London is permanently on the map in the MMA world.

“There were some nostalgic feelings leaving the old gym,” said Hominick, the 12-year veteran in MMA. “There were a lot of great fighters that came out of that gym, and there's a lot of tradition and memories from there, those are the kind of gyms where champions are born.”

But leaving the past behind and moving forward is part of life, and is something well understood by the well-spoken fighters.

“This is a big opportunity for us,” says 20-year-old fighter Chris Horodecki. “There's also some pressure because the old gym was so great, we are going to continue those winning ways here at Adrenaline and give the all we can to evolve not only as fighters but as people and trainers as well.”

The new gym is a massive 11,000 square foot facility offers 3,000 square feet of mat space, full size octagon, and ring, it also is complete with heavy bags and strength and conditioning equipment.

There's classes offered Monday through Saturday, and it's not just for experienced fighters, or people who want to fight in general. If you're looking just to get in shape or learn some self-defense, there are classes offered in beginner and advanced Kickboxing, Jiu-Jitsu for MMA, Wrestling for MMA, strength and conditioning, and general MMA training.

“I think that we are giving people in Ontario, and more specifically Southwestern Ontario, a great place to train, and the proof is in the pudding, from the fighters, from our records, from our experiences, we've all seen what it's like and are just looking to pass that on,” explained Horodecki, who currently boasts a professional record of 12-1.

The gym is open for new members now and is fully up and running, though the grand opening for the Gym is scheduled for November 1 and will feature an appearance by UFC fighter Gray Maynard and David Loiseau. For more information be sure to check out www.adrenalinemma.ca