This week, you're going to be treated with an interview I got to do with Dan And who is a member of Metal Blade's newest acquisitions, Vancouver's Bison BC. Their new disc, Quiet Earth just dropped a couple weeks ago.

Pete: I read that you were originally named Bison but had to change your name to Bison BC. Why did you do this and does the image of a Bison have any symbolism to the music you play?

Dan: We wanted a name that sounded heavy as fuck. Bison are the heaviest land animals in North America so there ya go. We added the ‘b.c.' after we found out about some other Bison bands in the world basically to cover our asses from any possible legal action in the future.

‘B.C.' was a nice ambiguous choice because we are from B.C. but ‘before Christ' sounds epic too. It doesn't mean any one thing...I like to think of it as “brutally crucial.” 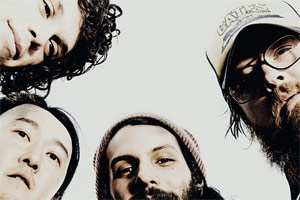 Pete: What are your musical influences? I hear some Cathedral, Sabbath and Mastodon influences when I listen to it?

Dan: Trying to pick certain bands that have influenced us over the years would take...well, years. We all grew up on all different kinds of punk, metal and ‘70s rock. We listen to everything and I'm sure it all has some affect or another. In turns of things we actually draw from it's more just an emotional response to a riff that makes you want to bang your head or pump your fist. Things like that really grab me. I fucking hate to use the term, but you can't beat a heavy ass song with a killer ‘groove'. And yes, Black Sabbath are the best fucking band ever.

Pete: What events/factors brought you into the Metal Blade Records camp as opposed to staying Indie or going with another label?

Dan: Our now good friend Sarah Lutz who works for Metal Blade in Toronto heard about us and came out to one of our shows in Vancouver. She was stoked and somehow convinced the rest of the label to want to put us out. We weren't really looking to sign any contracts or anything and our tight bro, Nick Hart, who does Forest Records really helped us out by putting out Earthbound but he's just as broke as we are. When the Blade offered to put us out, we were leery of signing any kind of contract but the whole Metal Blade staff are rad people and told us not to change a thing we were doing.

Pete: How do you think you've matured music wise from your indie debut to your Metal Blade debut?

Well when we recorded Earthbound we had only been playing with each other for a few months. We were still getting used to playing together and feeding off each other. The songs on Quiet Earth were written over the course of the past year and we've really just learned how to push each other more and are more comfortable as a band. Some of it's heavier, some of it's faster and some of it's slower. We tried some new things here and there and we're going to keep growing as a band but we don't want to change the kind of music we play. More riffs, more head banging.

Pete: How would you describe your sound and what you would expect at a Bison BC show for those who have never heard/seen Biscon BC?

Dan: Backwards crossover? Basically a mix of some thrash stuff and some sludgier stuff. We aren't really stoners like most people assume, but I don't mind being called stoner thrash. As far as the live shows we aren't the kind of dudes that want to whip a crowd into a circle pit or a flurry of karate moves. I've been to way too many shows in my life that turn into kickboxing fests and I can't stand it. We might be four guys yelling in a heavy band but I really want to the distinction to be made between bullshit testosterone fueled rage and frustration. It's an emotional release for sure but I want to keep as an all-inclusive emotional release.

Headbanging and moshing are two different things and what's the fucking point of beating the shit out of your friends instead of pumping your fists and screaming together in frustration of how fucked the world is? Let's all forget about our problems for a bit and have a good time all together in a positive environment where absolutely everyone feels comfortable and welcome. Unless you don't like loud tunes, then you might not feel too comfortable...sorry. We're an equal opportunity metal band.