On his second day of kindergarten at Jack Chambers Public School in north London, four-year-old Cole Petrie was taken out of school and diagnosed with stage-four neuroblastoma, a type of childhood cancer that originates in the sympathetic nervous system. Soon after, a tumor the size of a football was found in his abdomen.

“Cole is a little boy with both heart and strength and we will do everything in our power to help him beat this disease,” Cole's mother Jen Petrie said in an online journal that updates her son's progress. 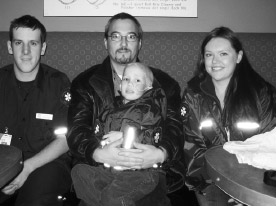 When first year paramedic student Josh Raikes first heard about Cole he knew he had to help.

With a donation jar in hand, Raikes garnered the help of all first year paramedic students and teachers to raise money towards outfitting Cole in a paramedic-style jacket. He also approached Novacks, who generously donated their services in creating the pint-sized coat.

A fundraiser for Cole and his family was held on November 19 at the Palasad, where friends, family and members of the community took part in a silent auction, which raised just over $9,000. The money will go towards medical costs.

Raikes and other paramedic students gave Cole his one-of-a-kind jacket at the event.

“Cole thinks that the jacket is very cool and it fits perfectly,” said Jen. “Now he can be a Rescue Hero!  How kind of them to reach out and do something special for Cole.”

The program raised more than the amount needed to pay for the jacket and the remaining money was donated to Cole's family.

“When I talked to [Cole's parents] for the first time at the Palasad… they were extremely pleased that so many people came out to support their child,” said Raikes.

At the end of September Cole began an aggressive form of chemotherapy and spent almost two months in the hospital. He is currently undergoing an experimental form of stem cell research, which will harvest his cells and send them to California to be preserved. In the upcoming months Cole will endure surgery, radiation and replantation of his stem cells.

To check on Cole's progress or to donate to his medical expenses, visit www.caringbridge.org and enter Cole Petrie's name.