Councilor candidate Preston wants to give back to second home

Jessica Ireland News March 15, 2010
Municipal councilor candidate, Jeff Preston, is originally from Port Elgin; however, London — particularly Ward 14 — has been his home away from home since childhood.

“When I was five and doing lots of medical stuff in Toronto, my parents decided it was too much (and) we needed to find somewhere more convenient,” he said — at three months old, Preston was diagnosed with congenital muscular dystrophy. “Whenever we would come (to London), we would stay in the hospital in Ward 14.”

“The community gave me so much during a stressful and sometimes traumatic part of my life, it's time for me to give back to them and to London.”

Preston also selected Ward 14 for its diversity of issues — in terms of population with an urban and rural mix, and environmentally-sensitive areas like Meadowlily Woods. 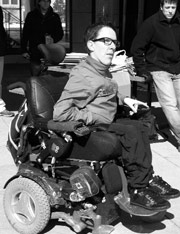 Municipal politics has always been an interest for Preston, who is currently working on his PhD in media studies with a focus on disability and accessibility policy at the University of Western Ontario.

“My philosophy is that I always want to be where I can do the most amount of good and the time is right right now to do this,” he said.

While the 26-year-old is one of the younger candidates running, Preston is already prepared for the campaign machine given the year-long preparations he underwent for his 650km Mobilize March journey by wheelchair from London to Ottawa in 2008 to bring awareness to the issue of accessible transit.

Even prior to his official announcement on March 4, Preston has been engaging the community in as much dialogue as possible — something he really loves about the whole process.

“I've been learning so much by talking to people,” he said. “It sounds corny but I feel so alive. It's empowering and encouraging.”

His talks with residents have been an inspiration to how he's establishing his platform.

His overall campaign principles listed on his website focus on a “financially responsible (and) sustainable growth.” However, he also wants his platform to not only be “for the people” but, almost literally, “by the people” — a “build-a-platform.” Preston is encouraging the citizens of Ward 14 to become engaged in the local politics that affect them by contacting him with the issues they think he should address.

“Politicians in general are so quick to tell us what we think we want to hear,” he said. “I want to hear what the people of Ward 14 want.”

While the election is not until October of this year, Preston will be all over the city until then. But despite his inexperience, he said he's been receiving a lot of support from current city councilors and city hall staff — a “network of people I've worked with before that I look forward to working with in the future.”

Usually being told to “slow down” by family and friends, Preston is doing anything but at this point, he said. He's just ready to move full-speed ahead to speak out for those who can't.

“I've seen what it's like on the other side where you don't feel like people are listening,” he said. “I just want to help the people of Ward 14.”

“Win or lose, I think the experience will be life-changing.”

If you want to learn more about Jeff Preston's platform and have an issue you'd like to share with him, visit his website at: http://getmobilized.ca. Ward 14 stretches from the southeast corner on Commissioner Road and south on Wellington.