Ivana Pelisek Sports & Leisure March 22, 2010
(Sang to the tune of The Red Flag by Jim Connell)

No more lonely mornings by the television waiting for that football game to start. No more lonely nights looking at the time difference in anticipation for your Red Army to step on the green. The time has come. It is here. 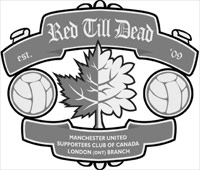 Together we shall cheer on and sing in harmony, for the official Manchester United Supporters Club of Canada — London Chapter has arrived. Thanks to Derek Collins-Newman, co-founder of the London Chapter has finally seen the light and is officially up and running with over 50 members.

“The club is the first official supporters club in Ontario and one of three overall in all of Canada,” said Collins-Newman.

The time has never been better for Manchester United and their fans, as they are competing strongly in the Premier League and the UEFA Champions League.

“Being around other members makes games more exciting,” Collins-Newman said.

The club's headquarters are located at Scott's Corner Pub, located at 268 Dundas Street at the corner of Wellington. Many of London's soccer fans are already familiar with the pub and their Saturday and Sunday mornings are well known amongst those who appreciate the soccer spirit and passion.

The official website for Manchester United Supporters Club of Canada — London Chapter is www.redtilldead.com, which features detailed information on how to become a member, biography of the club, game updates, and meet times. The games are free to watch at Scott's Corner, so all that is required is your Red Army spirit, your passion and the love of the game.