Every year there are certain events and storylines that happen in the National Football League. For example: every year we have a Super Bowl, an NFL draft and a veteran player that gets paid way too much to sign as a free agent (i.e.: Larry Johnson to the Washington Redskins). But, there is one storyline that trumps them all, I am talking about Brett Favre.

There aren't many words that haven't been attributed to Favre over his 19-season career. Legend, hero and superstar are all things that describe Favre. However, for the past seven years or so, the main stories about the ageless Favre have been about whether or not he will retire once and for all. Favre has officially retired from the NFL twice.

After the 2007-08 season (when he was with the Green Bay Packers) Favre held a teary retirement press conference, saying he had given all he could to the sport. As we all know, Favre was back in the NFL during the 2008-09 season, after being reinstated by the NFL and subsequently traded to the New York Jets. Favre's tenure as a Jet had its ups and downs, culminating in a disappointing 9-7 record, and 22 interceptions from the old gunslinger. However, after another less dramatic retirement, Favre would return once again. Since the Jets released Favre shortly after his “retirement,” Favre was free to sign with any team he wanted to. 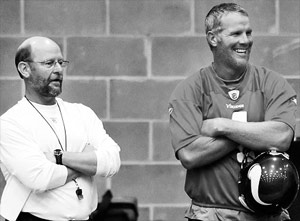 That team turned out to be the Minnesota Vikings, the same team that said they were interested in having him after he retired from Green Bay. The result this time? A trip to the NFC championship game, and a career low seven interceptions. Now, the Vikings and Favre are facing the same questions that have haunted the 40-year old Favre for nearly a decade. Favre is under contract for another season in Minnesota, and many experts feel it is almost certain that Favre will be back.

I tend to agree with the experts on this one. Favre came back for one thing (over and over again), and that is to win a Super Bowl, to have an ending similar to that of John Elway and Jerome Bettis. With the Vikings bringing back much of the same roster as a year ago, it isn't a long shot to say that they will be heavily favoured to win the NFC North division again and make a run at the Super Bowl, with Favre at the helm that is.

Vikings coach Brad Childress has gone on record saying he will give Favre all the time he needs to make the decision, and it is very likely we won't hear the final word until sometime this summer. While this continues to be a top offseason story, it seems as though the media is downplaying it a bit more than usual. Maybe everyone is finally sick and tired about Favre and his terrible decision making skills, or maybe they are so sure he will be back that they feel it isn't worth focusing on.

Either way, I personally would love to see Favre make one more run at a title. He deserves to go out on top after such a stellar NFL career.

Favre Watch aside, next week I will take a look at a new trend in the NFL: trading players.

For more from the NFL Czar, check out his blog at jvzsblog.blogspot.com