Austin's film career is anything but Stone Cold


After a hugely successful career that saw him become perhaps the biggest box office draw in the history of professional wrestling, “Stone Cold” Steve Austin has now embarked on a different path — that of a movie star. His latest film Damage arrived on Blu-ray and DVD this past Tuesday (see review next week). The Interrobang was lucky enough to grab an exclusive interview with Austin during a whirlwind day of publicity on the day of the film's release. 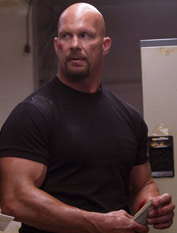 Damage sees Austin's starring as John Brickner, who like Austin's WWE persona, is a bit of an anti-hero. “He's done some bad things, and he gets drawn into some more bad things, in order to do some good,” explained Austin. Brickner, an ex-con, gets embroiled in the world of underground fighting to raise money in order to help someone who he has wronged in the past.

The role sees Austin engaging in similar physicality to that which he was accustomed to in the WWE. Asked whether he was involved in the fight choreography himself, Austin said, “I put my two cents in every once in a while,” but offered praise and most of the credit to fight choreographer Steve McMichael. Austin was not the only one in the cast to come from a physically demanding sport, as Austin noted, “Most of the other guys are MMA fighters, not from the UFC, but from other leagues.”

While most of Austin's work thus far has been in the action genre, Austin did exhibit great comedic ability at times in his WWE tenure, and would consider doing some other types of films.

“I would be interested in branching out,” said Austin, “but you've got to run before you can walk.” Austin went on to say that he only has four or five films under his belt so far, and he is still learning. “I didn't come from a Shakespearean theatre background. I was on the road every night as part of the wrestling business.”

When asked about making the transition from the wrestling industry to feature films, and who he feels has done a good or not so good job, Austin remained humble, and didn't bad mouth anyone's acting ability or film choices. Although there are a few people he certainly could have named — like that guy who starred in Mr. Nanny and Santa With Muscles, what was his name again? Austin didn't have anything negative to say about anyone, and said he hasn't actually seen too many of his former peers work in films. He did however mention wrestling legend “Rowdy” Roddy Piper, who has had a 20 plus years in showbiz.

When asked if he sees any current stars in the WWE or TNA who could make a similar leap to the world of motion pictures, Austin stressed, as he did throughout the interview, that the wrestling business does not prepare you for films.

“When I was in the wrestling business I had to perform for the person in the worst seat in the house, row 100,” explained Austin, in comparison to the more intimate surroundings of a film set, where the camera is his audience. He went onto explain that charisma in wrestling alone won't help you in movies, as you have to go from character to character, film to film.

One of the things Austin was most famous for during his wrestling career was his post-match beer bashes where he would down a few “Steveweisers” thrown into the ring from the crowd. I asked him about what his beer of choice is these days.

“I don't drink much beer... if I'm in the States I'll maybe drink a Corona with a lime in it, but I'm more into red wine these days,” said Austin. I asked him if he ever bashed two wine bottles together and chugged them down in trademark “Stone Cold” fashion — “No, I haven't tried that yet,” replied Austin. That's probably for the best.

If Austin were to share a beer (or wine) with anyone in the movie business though, a couple of silver screen legends would be his choice.

“He's gone now, but my all-time favourite is John Wayne,” said Austin with clear admiration. He also noted that he was a big fan of Clint Eastwood.

While most people probably don't picture Steve Austin sitting in front of a computer tweeting, that's exactly what Austin has been up to these days.

“I never saw myself as a Twitter type of person either,” said Austin, “but it's a grass roots way to get out there and promote my films.” Austin noted that he currently has an official website in development, but for now the way fans can keep in touch with him is through his Twitter page www.twitter.com/steveaustinBSR

Catch Austin in Damage, now available on Blu-ray or DVD. You can also see him in theatres this summer as one of the stars of the blockbuster The Expendables, alongside Sylvester Stallone, Jet Li, Jason Statham, Mickey Rourke and Arnold Schwarzenegger, among others.