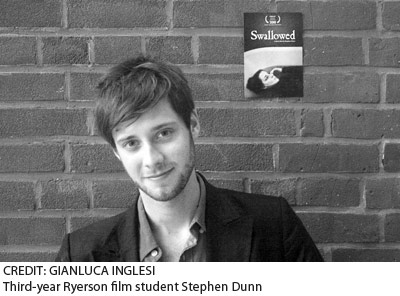 
TORONTO (CUP) — As the Toronto International Film Festival came to an end, celebrities, paparazzi and crazed fans all packed their bags. But this year's festival will leave a lasting impression on Stephen Dunn.

Dunn, a third-year film student at Ryerson University, was awarded the second place Jury prize and the Fan Favourite Award for his film Swallowed. He was recognized at the RBC Emerging Filmmaker's Award Ceremony on September 16 and received a total of $15,000 with the two awards.

A native of St. John's, N.L., Dunn came to Ryerson in 2008 and was selected as one of 25 international industry professionals for TIFF's Talent Lab Program in fall 2009. After working with mentors of the program including celebrated filmmakers and actors such as Danny Boyle, Miranda July and Jane Campion, Dunn and the other participants were given a camera and a budget of $500 to create a film surrounding the theme of water.

The result was Swallowed, a film that travels deep into a woman's mourning of her husband, who was swallowed by a whale.

"It's a story of the loss she lives with through her entire life and the resilience she obtains in order to move on," Dunn said.

During production in 2009, Dunn worked closely with his mother Linda Dunn and his best friend Mark Bennett. Together they shot the film in his hometown of St. John's with certain scenes created at Ryerson.

Although the prize was a great reward for Dunn, it didn't compare to the experience of making the film.

"Making this film has transformed me in confidence and style. I had to identify with (myself) in order to make this film."

TIFF also helped to expose the film to new audiences around the world through their online showcase of the competition.

"When it was distributed so many people got to see it, which is often hard for a filmmaker because you don't want to have to put your film on YouTube. It was a good opportunity for it to be online as part of such a prestigious competition," he said.

The money will be divided, said Dunn, with parts going to those who spent the most time on the film and the rest directed towards his future film projects, including the documentary Dunn is currently collaborating on.

As he moves forward in the program and his career he will always have passion for what he does.

"I'm a storyteller. I think film is just the ultimate medium for me because it encompasses sound, performance, image, editing — it's such a collaborative art. It's never just one person. There were so many people who worked on Swallowed and other class projects. It's almost like having a community. It's a really cool industry and there's some really great people in it," Dunn said.