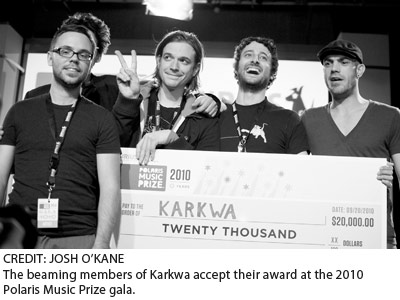 The announcement came as a surprise, most of all for the victorious francophone band. The hype leading up to the September 20 gala, now in its fifth year, seemed to all but name second-time nominee Shad the champion, after fellow hip-hop artist K'Naan was snubbed in favour of hardcore punk group Fucked Up in 2009.

Nervous though they were, few predicted the eventual outcome, and most were just happy to be there.

Gabriel Malenfant of the Acadian hip-hop trio Radio Radio explained that being nominated made him "feel tingly inside." Owen Pallett, who was the prize's inaugural winner back in 2006 under the moniker Final Fantasy, agreed that nomination is still "a weird and confusing thing."

An 11-person jury decided who would take home the $20,000 prize and the title of best Canadian album of the year during the first few hours of the event, which was broadcast live. The night featured, for the second year in a row, performances from all 10 acts that made the shortlist.

Hosted by CBC Radio 3's pintsized, lame joker Grant Lawrence and MuchMusic's Sarah Taylor, the show kicked off with an 11- piece performance from Broken Social Scene. Brendan Canning jigged and bounced to the Forgiveness Rock Record tunes Meet Me in the Basement and Texico Bitches.

He fared better than the Sadies' Travis Good who tripped, flailing on his back like a dropped tortoise at the end of their performance. Luckily, he'd been so far stage left that most cameras missed it.

"This'll probably be my only opportunity to say thanks, so thanks," announced frontman Dallas Good, admitting what everyone already knew — the Sadies weren't even under consideration.

Vancouver crooner, and Seth Rogen look-a-like, Dan Mangan was unequivocally the highlight performance. He was too lovable, too obvious and too nice a choice for the jurists, a victim of his own charms. But when he climbed atop one of Broken Social Scene's many tables and beckoned hundreds of apathetic hipster musicians and critics to join a chorus of Robots, everyone from Owen Pallett to Karkwa sang along. Hearts melted, as did the competitive atmosphere.

"There's something vaguely ridiculous about comparing totally different artists and totally different albums," Caribou's Dan Snaith said before the gala began. The 2008 winner and 2010 nominee was just glad that "a prize like this allows you to focus attention on lots of different kinds of music."

But like any "increasingly prestigious" award, as dubbed by the New Yorker, Polaris is not without its politics and tokenism. So far, it has gone to the avant-garde Owen Pallett, the folksy Patrick Watson, Caribou's synth, hardcore Fucked Up and now, what Karkwa's lead singer Louis-Jean Cormier calls, French "Montreal indie rock."

The decision to award the allfrancophone band may not be totally unexpected. The grand jury had three francophones on hand: François Marchand, André Peloquin and Philippe Rezzonico.

What most of the English music scene has been asking since the shortlist came out is, "car, quoi?" Who is this random band that triumphed over two prior winners and industry heavyweights like Broken Social Scene and Tegan and Sara?

For Karkwa, as their album title — Les chemins de verre (The Glass Paths) — would suggest, it was a lonely path to get to Polaris as the only francophone musicians nominated, not counting Radio Radio's Franco-Acadian Chiac.

After the announcement, Cormier, nearly in tears, took the stage with his bandmates. Earlier in the evening, he said, "I think that the language barrier is still there," and felt certain the only thing his band would win that night was exposure to an anglophone audience.

The band has been together for a dozen years, touring around all the francophone countries. They are now excited about the opportunity to play for their fellow countrymen — but not until they have the opportunity to use part of their $20,000 to hire a real tour manager and a new van.

Before their win, Cormier said his celebration music, if Karkwa were to triumph, would be Owen Pallett's Heartland. Maybe collaboration is in their future?

"We try (to) do so some great poetry, but I don't know if we succeed at that," Cormier chuckled. "I guess it works."