Reel Views: Easily an A in high school films 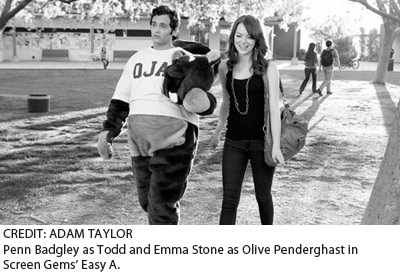 A is for "adulterer," or in the case of Easy A "a comically misguided attempt at popularity." That is the central idea of Will Gluck's 2010 teen comedy, which is loosely based around the concepts of the book The Scarlet Letter. This movie has it all in the way of high school movie: uncool girls finally getting noticed, teens awkwardly dealing with their sexuality, and of course a phenomenal amount of angst. This should come as no surprise for viewers, though, as Easy A is the sophomore directing effort for Gluck, whose first film, Fired Up! was a huge hit with the teenage crowd.

Easy A tells the story of highschooler Olive and her undeserved infamy. It begins when Olive innocently lies to her best friend Rhiannon about losing her V-card to a college guy and is overheard by one of the school's uber-religious right wing girls. The story spreads quickly through the school whereupon reaching Brandon, who is not yet open about his homosexuality. He urges Olive to have fake sex with him at a party to give him the reputation of a straight guy, thus making high school just a little more bearable. Olive's life quickly becomes more complicated as all the outcasts of the school want to pay her for her unique services, and the cool guys think she is an actual prostitute. Along the way friendships are ruined, a marriage disintegrates and loyalties are called into serious question. However, being that Easy A is a teen movie, it is also full of humour, redemption, success and getting the guy in the end. Quite near perfection for a teen movie.

The cast of Easy A is well rounded with Emma Stone taking the lead as Olive, her first starring role after playing strong support in the hit films Superbad and Zombieland. Stone hits her comedic stride in this movie, as she pulls off the intelligent yet sarcastic teenager with no trouble. Playing her very liberal parents are Patricia Clarkson and Stanley Tucci, who it seems cannot fail on screen. Every line of his will keep you in stitches. Dan Byrd plays Brandon, contrasted by Penn Badgley as "Woodchuck" Todd, the boy who actually wants to date Olive. Alyson Michaylka appears as Rhiannon, who goes from being Olive's best friend to one of her numerous enemies. Amanda Bynes and Cam Gigandet play Marianne and Micah, the school's religious power couple, and Thomas Hayden Church is the teacher everyone wishes they could have had in high school, the ultra cool Mr. Griffith.

Easy A has certain merits that other teen movies lack. It shows serious and lasting consequences of destructive teen behaviour, and it has intelligent humour that is far above so many other films of its kind. But Easy A is still a teen movie, full of homages to the late John Hughes, and if teen movies are your film of choice then this is a definite must-see. Rating: 4 out of 5 stars