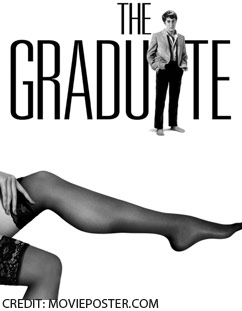 
The Graduate is considered to be an all-time classic. It has been called "culturally, historically, or aesthetically significant" by the U.S. National Film Registry. The American Film Institute listed it is the seventh greatest film of alltime. For decades, critics have fawned over the tale of Benjamin Braddock and his forbidden encounters with Mrs. Robinson.

Well, once again, everybody but me is wrong.

Since it is Sex Week here at Fanshawe, I thought it would be a good time for me to view The Graduate for the first time ever, since sex plays such an integral part in the story.

Fresh out of college, 20-year-old Benjamin Braddock (Dustin Hoffman) is faced with many fears and countless questions about what he is going to do next. The last thing anybody thought he would do next is start an illicit affair with the wife of his father's business partner, Mrs. Robinson (Anne Bancroft).

At first the shy and awkward Benjamin spurns the cougar's advances, but perhaps out of boredom, Benjamin gives in and they begin their affair. Things get even more complicated, however, when Mrs. Robinson's daughter Elaine comes back home from college for a visit.

Benjamin initially has no interest in the younger Robinson, and tries to ensure she has no interest in him by taking her on a date to a strip club. But in true paint-bynumbers Hollywood storytelling, they end up falling in love after one date.

Once again, complications arise when Elaine gets wind of her mother and Benjamin's bedroom shenanigans. She returns to college, so Benjamin decides to rent a room near campus to follow her before eventually trying to win her back. So Benjamin Braddock is not only a homewrecker, he is also a stalker. With all due respect to Darth Vader, this fellow has got to be the most loathsome cinematic villain of all time.

Dustin Hoffman was adequate in the film, which is pretty much the level he is always at, except of course for his superior work in 2004's Meet The Fockers. Although he is playing a 20 year old in the film, he looks to be not a day under 40. I wonder if he looked like he was 30 when he was 10.

While Hoffman was merely okay, two of the supporting actors fared much better. Benjamin's father was played by William Daniels, who voiced KITT in the original "Knight Rider" series and played Mr. Feeney in the 1990s sitcom "Boy Meets World." Another classic sitcom star, Norman Fell also was a rare bright spot in the film. Fell played landlord Mr. Roper in the classic series "Three's Company," and stars in this film as, well, Benjamin's landlord. Nobody plays a landlord like Norman Fell.

I won't give away the ending, since you may want to watch the movie, although I certainly do not recommend doing so. I will say, however, that it would have been nice to see the young awkward fellow and the cougar end up together, maybe get married, maybe even have a kid. That would have been a great surprise ending, but alas that is not what happens.

It's quite ironic that a film called The Graduate would end up being a failure on so many levels. So here's to you, Mrs. Robinson. Jesus may love you more than you will ever know, but this reviewer doesn't think much of you or your film (woah, woah, woah).