2006 Outlander will outlast other SUVs


The mini-sport ute market is very competitive sector in the market these days. With the price of gas going up all the time, people are now looking into smaller SUV's more than ever.

One model that has been doing well in sales for quite some time is the Mitsubishi Outlander.

I just recently spent some time with one, and the first thing that came to mind was that all the Japanese made Mitsubishis are better than the North American made ones. The fit and finish on this was quite nice. I actually liked being in this car.

Apart from that, the interior was nearly flawless. I loved the design; the centre dash clock is just plain cool. Initially, I griped about the driver seats cushion being a bit too short for my liking, but I got used to it. 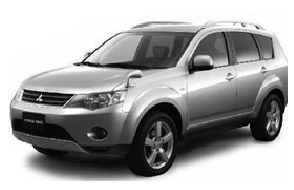 So, not much improvement needed for the interior, and not much needed for the exterior either. The model I had looked fantastic in its metallic grey colour. Everyone thought it was much more expensive then it actually was, and that's a first for any Mitsubishi product I have ever come across.

They certainly got the design right, and I hope they don't ruin it. Mitsubishi just showed a new Outlander at the Tokyo Motor Show, and it doesn't look as good as this current one. So, I hope the North American market new Outlander will look better than the first peek from Tokyo.

The powerplant is good too. It has a 2.4 litre, four-cylinder engine, which produces 160 hp and 162 lb/ft of torque, thanks to its MIVEC electronic valve control system.

This allows the engine to run smoothly most of the time, but delivers the power at higher revs. Sadly, the fuel economy wasn't as good as I was hoping, but that is probably because my test car had a permanent all-wheel drive system. However, you can buy a front wheel drive only version too.

However, Mitsubishi does make great all-wheel drive systems, and this was no exception. The result was fantastic handling. The body control was good, and unlike other SUV's, I never felt that this was going to tip over on its roof. You could really attack corners in this Outlander, and that came as a pleasant surprise, unlike the gearbox.

My test car had the four-speed automatic, which had a manual shift gate. I hardly ever used that feature because the gearing ratio just seemed wrong. Either I was in too high a gear or too low a gear, so I just stuck it in drive and just drove. You can have a manual, in fact I would suggest you do that, since the manual transmissions on Mitsubishi's are usually pretty good. Plus, it'll save you some money too.

Couple that with Mitsubishi's excellent warranty and this makes for an intelligent long term buy.