Candidates square off in Forwell


When the polls open and eventually close on January 23rd the future of Canada will become clearer and the citizens of this country will have decided who will lead them for the upcoming years.

Just a few days before the Federal Election in Canada, Fanshawe College did its part to inform the student population about various political issues as the college hosted an all-candidates forum on Wednesday, January 18th in Forwell Hall. 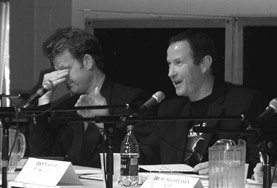 The agenda for the event included allowing each candidate time to introduce themselves and their party, a question and answer period, and some closing statements by each candidate.

Many issues were covered in the question and answer period, and the true values and beliefs of each party were evident with their answers. Issues included social program cuts, the co-operation with the Untied States regarding the missile defence system, the legalization of marijuana, gay marriage, and negative campaign strategies.

An issue that affects every student at Fanshawe College is each parties post secondary education platform. How the election of each potential government will benefit current students and recently graduated students alike is of concern for everyone attending the college.

Morely of the Progressive Canadian Party said Canada should be putting an emphasis on young people, and that they are essential for Canada's future.

“We are looking at a program called debt forgiveness,” Morley said. “If anyone does have accumulated debt but stays in Canada, works in Canada, probably looking at a ten year time frame, that we would excuse the debt. We're investing in the youth, we have ordered to move us forward to get post secondary education which is the only way that we can move forward with the new technologies that are going to be coming out.”

McLaughlin of the Green Party said students will be given tuition cuts and increased co-op opportunities by voting Green, but emphasised the importance of environmental protection.

“I know the student's concern is tuition directly, and hopefully that is still relevant in the future that's coming.”

Tuition, affordable housing, and child care were three points that Mathyssen said is the most important aspects the NDP will be concentrating on in terms of education.

“I think that those three things impact a lot of students. In terms of tuition fees we want to reduce and freeze tuition fees, and bring back grants, other then Japan we're the only country in the elite eight that doesn't have a grant system for students,” Mathyssen said.

“We want to revamp the loan systems because students are leaving with a brick of debt and the average is up around $25,000 for undergraduates. That is not acceptable. In our platform we're talking about making sure that there is funding available for specific, targeted to education, so that we can have the professors and the teachers in place so that you get the world class education that you deserve.”

Pearson, representing the Liberals, had commitments directly after the debate and was unavailable for comment.

However the Liberal platform for post secondary education does say that they have proposed a $2.5 billion increase in post secondary financial aid, and up to $3,000 for tuition annually will be paid to students by the government starting in 2007.

Mailer said that voting Conservative is in the best interest for students in the long term and in the short term as well.
“We're trying to strike a balance between helping students now with some tax cuts that we think will be helpful to them in terms of a commuter and bus pass tax break, tax break on text books, things of that nature will help students in the short term,” Mailer said.

“But also we guarantee you that when they do graduate that it is more likely that there is a stronger economy under a Conservative government and that there will be jobs and opportunities there for students who are obviously motivated people.”

One thing all of the candidates agreed on was the importance of voting, which they all encouraged each student to do.