American lawyers fear juries are falling for “the CSI Effect”


Editorial opinions or comments expressed in this online edition of Interrobang newspaper reflect the views of the writer and are not those of the Interrobang or the Fanshawe Student Union. The Interrobang is published weekly by the Fanshawe Student Union at 1001 Fanshawe College Blvd., P.O. Box 7005, London, Ontario, N5Y 5R6 and distributed through the Fanshawe College community. Letters to the editor are welcome. All letters are subject to editing and should be emailed. All letters must be accompanied by contact information. Letters can also be submitted online by clicking here.
California law experts have coined a new term to explain the elevated need for forensic evidence to convict or acquit a defendant.

They've called it “the CSI Effect.”

Many American lawyers and law teachers are witnessing an increasing demand from juries to provide DNA and fingerprint evidence to support or disprove a case these days, and the need for hard proof is being linked to the unparalleled popularity of two hit shows and their equally popular spin-offs; CSI and Law & Order.

Between the two franchises, there are a total of six prime-time shows airing on CBS and NBC, not to mention the hundreds of hours of reruns in syndication each week. According to CNN, an average of 26 million and 14.6 million Americans tune in to CSI and Law & Order each week, respectively. That means 40 million people have some sort of distorted knowledge of how crime scenes are processed, suspects are captured, evidence is presented, and convictions are made. 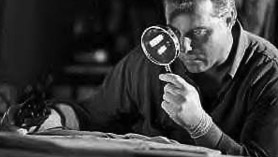 The problems with this new, fragmented knowledge of forensic criminology are glaringly obvious; the information presented on the shows is not always as accurate as a real lab would be. TV needs to sensationalize the process and make things flashier, have more gadgets and use more lasers. And thanks to this bigger-is-better approach, the masses have come to expect a fireworks show while they sit in the jury box, and are increasingly searching for the proverbial, or in some cases actual, smoking gun. And when they don't see the computer simulated recreation of the crash site, or the bloody t-shirt and cremated bone fragments, they aren't sure what to believe. TV-watching jury members now consider eyewitness accounts, which for so long dominated the evidence hierarchy, to be unreliable at best. The want confessions, coerced from the suspect during a heated, Detective Stabler-style interrogation.

There have been real, documented cases of jurors left wanting and acquittals granted for lack of forensic evidence. Even the high-profile Robert Blake case is shrouded in TV-series mystery. CNN reports that a prospective juror on the Blake case responded that he would decide guilt or innocence easily, based on DNA evidence. (As it turned out, there was no DNA evidence uncovered during the Blake trial for this juror to base his decision on.)

Some people don't believe that the CSI Effect is a threat to fair trials throughout North America, but I think this is something that needs to be considered. After all, television has long swayed people's beliefs in many other areas outside of law enforcement.

There are even cases where university professors are using episodes of these crime dramas in their classrooms to teach about situations, and some schools claim to have the entire series of CSI in their library to refer to during class lectures.

Since the inception of ER in 1994, I think its probably pretty safe to say that the instance of self-diagnosis in the medical field has steadily risen. Sure, this is probably due also to the increased ease of finding medical information on the Internet, but thanks to the hunky doctors on ER, we know what words we're looking for, and can approach WebMD with some sort of premature certainty.

And we can't forget our extensive knowledge of deep space, thanks to Star Trek and all of its franchises. I think a survey of NASA employees would reveal a high number of trekkies.

But television shows have been around for ages; why, then, are we so suddenly prone to letting our televisions be our teachers? Perhaps it's the wildly popular trend of reality TV and home makeover shows that are leading us astray. Maybe after learning how to redecorate your kitchen for $1000 on Trading Spaces, you flip to Grey's Anatomy and learn how to perform an emergency tracheotomy. Maybe it has just become such a large part of our culture and upbringing that we don't even realize we're learning our values and methods from scripted television.

Whatever it is, I just hope that if I ever end up in the defendant's chair, it isn't Grissom presenting the evidence against me.

What have you learned from TV? Email Ruth at overcaffinated@hotmail.com