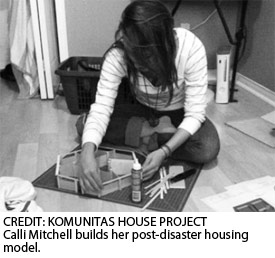 
Would you pay good money to see two English teachers in a fight? This week, that's what you'll be able to do.

From April 11 to April 15, the School of Language and Liberal Studies and the Fanshawe Student Union will be raising funds for the Japan earthquake/tsunami victims. Watch for faculty and students collecting donations in the hallways, in classrooms and in the SUB. Here's what they will be doing for your donations:

On Monday, April 11 in front of the bookstore there will be origami cranes, cards and mobiles, as well homemade cookies for sale. There will also be a silent auction with artwork, hand-carved hickory walking sticks, a genuine kimono, an origami set and gift bags from the bookstore.

On Tuesday April 12 from 12 to 2 p.m. in B2001 there will be a display of original post-disaster housing designs created by the thirdyear architectural technology students as part of the Komunitas House Project. Pick your favourite design or discuss construction issues with the students.

There will be a speaker series throughout the week:

Starting April 11 and running through until the 30, you will be able to add $1 or $2 donation to your purchases at Oasis, the Out Back Shack, the College Variety Store, the Bookstore and the Clothing Store. There will also be collection tins for donations at the FSU Pharmacy, Fringe hair salon and Falcon's Nest.

During the week of April 11 to 15 at the Oasis, proceeds from the lunch and dinner specials will go towards the Red Cross.

Last but certainly not least is the battle of the teachers. Darren David and Brian Dunphy will be showing off their Akido skills in Forewell Hall as part of the nooner during the week.

With plenty of things going on throughout the week, it is easy for you to take part and help raise money for the victims in Japan.