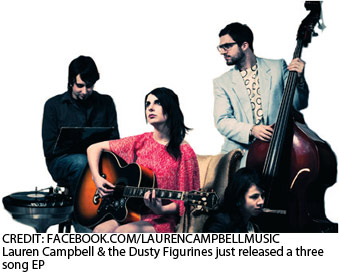 
"I don't want to be another journal entry/I'm looking for something just a little bit more/Maybe for this you'll think I'm crazy..."
~ Lauren Campbell, Goodbye Daisy

When Lauren Campbell writes, she writes honestly and without reservations. Her music glides effortlessly and as her lyrics to Goodbye Daisy suggest, she doesn't plan on staying still for very long.

How many times have you performed in London?
Since moving to London in September of 2008 for school (to take Music Industry Arts at Fanshawe) I've probably played about 20 shows, alone and accompanying others. During my first year, I didn't really play many shows. I was still working on writing songs and getting comfortable playing in front of an audience. I sang alongside a friend, singersongwriter Mark Kulmala, at venues like the London Music Club and the Black Shire Pub and that helped ease my way into the London music scene.

Within the past year, I've been playing a lot more around the city at places like APK Live, Elite and Gigs. It's been a constant growing period and you're probably thinking that in two years, 20 shows is next to nothing, but thinking back to my first show in London and comparing it to the most recent show I've played, I feel like I've come a long, long way. It's been super great lately too because I've been playing with the band, we go by Lauren Campbell & The Dusty Figurines, and it takes performing to a whole new level. Being in a group with three of the coolest cats I know (Adam Cannon on drums, Pete Moss on bass and James Fox on lead guitar) is unreal.

What do you like about performing here in the city?
Performing in London has been great so far! The audience is always really receptive and respectful and it's obviously really cool when people show up and sing along to the songs. A lot of the venues in London are really nice to play at too.

How can you describe your newly released EP, and could you tell me about the album?
The EP we're releasing as Lauren Campbell & The Dusty Figurines is a three-song EP. We recorded it at a local studio, EMAC Recording studios in January 2011. It was produced by Moe Berg (from Canadian band The Pursuit of Happiness and AUX TV's Master Tracks). The music is comparable to that of Sarah Harmer, Joel Plaskett and Fleetwood Mac. It's a little bit of rock, folk, pop and country all intertwined to hopefully create something refreshing to listen to. We had a lot of fun making the recording and we really hope it comes across to the listener. All of the songs on the EP were written during our time in the Music Industry Arts program.

Visit Campbell's Facebook page at facebook.com/LaurenCampbellMusic for a free song and other fun things. Check her out on Myspace at myspace.com/laurencampbellmusic. You can also follow her on Twitter @LaurenCampbellM or @DustyFigurines.