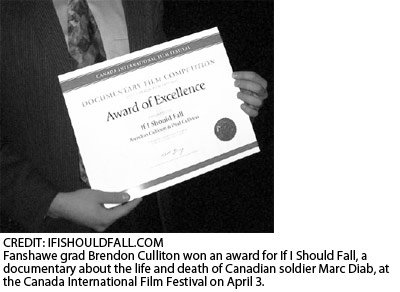 
If I Should Fall is a documentary that tells the story of 22-year-old Canadian trooper Marc Diab, of the Royal Canadian Dragoons. In March 2009, he was two weeks away from the end of his tour in Afghanistan when an improvised explosive device struck his vehicle and killed him.

Brendon Culliton, a Fanshawe broadcast journalism and digital post-production graduate, along with his father, Paul, put together the documentary with the help of Diab's family and fellow troopers.

"The film tells a story of Marc Diab's life and death, and how he got involved with the military. It tells the story through the people who knew him, and his own personal footage," explained Brendon. "It is a very unique story (because) his family moved to Canada from war-torn Lebanon … He saw the suffering that the people went through in Afghanistan as similar to what people went through in Lebanon."

If I Should Fall uses Marc's story to tell a bigger story. "It's not just about Marc, it really is about all the Canadian soldiers, and about Canadian culture," Brendon explained.

On April 3, the film won an Award of Excellence in the Documentary division of the 2011 Canada International Film Festival in Vancouver, B.C.

The ceremony was small, but Brendon said it was a great experience. "It was really cool just because it was a room full of upcoming filmmakers. A lot of people were just really grateful to be there, because in many circumstances, like myself, I'm still early in my career. To receive recognition like this really helps," he said.

"It was a very courageous thing for the troopers to tell the story," said Paul. "It was also a sign of how much the story meant to them, that they were able to bare their souls ... We want people to understand what has happened, and what these young men gave up."

"I think, in general, Canadian public is interested in hearing what our soldiers go through, even thought it's not something we see too often on the news," Brendon added. "The film itself gives the audience a chance to take part in listening to the soldiers' story. It means a lot for (the soldiers) if they realize that there's a good amount of Canadians who have heard their story and understand what they're going through."

At the end of April, Paul and Brendon plan to submit If I Should Fall to the Toronto International Film Festival, which takes place in September. From there, the team plans to distribute the film to high schools across the country, as the film has been well received in the schools that have shown it, said Paul.

"If the movie gains the profile that we hope it will, it will be a highly recognized story of the Afghan war," he added.