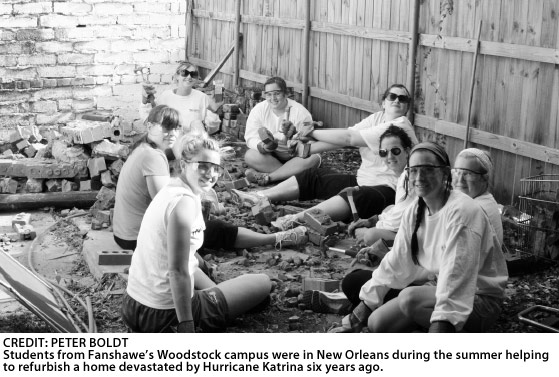 In May, when most students were beginning their summer vacation, a handful of people from Fanshawe's Woodstock campus were making a big difference 2,000 km away.

Nineteen students and two staff made the trip to New Orleans to help refurbish a home devastated by Hurricane Katrina.

The nearly century-old house had been under 15 feet of water. "The interior had to be completely gutted, the exterior had to be scraped down to the bone, we had to remove walls and brick and reseal the outside of the home," explained Elizabeth Schonemann, Coordinator of the Woodstock Police Foundations program and organizer of the trip. "It was a lot of work."

This was the fourth year in a row that the trip has been organized. Originally created as part of a career development event for some Carpentry students, the number of participants has grown each year.

The trip now includes students from Accelerated Police Foundations program on the Woodstock campus. The program requires students to complete 40 volunteer hours to graduate, but their class schedules tend to be so busy it can be difficult to find the time to volunteer. "Basically this is a week they have off (to volunteer)," said Schonemann. This year's trip also included a Hair Stylist student, three Child and Youth Worker students and one Heating, Ventilation and Air Conditioning student.

The students raised money for the trip through barbeques, pancake breakfasts, garage sales and a car wash throughout January and February. According to Schonemann, they raised $4,300.

"The students gain a lot from it; it's a rewarding trip," she said. The volunteers get two days off to explore the city, and then buckle down and work hard for the remaining time. "A lot of the students have never been to areas that have been heavily devastated like that, and a lot of them say it feels like a third-world country."

Zach Pollard was one of the Police Foundations students who went on the trip. "It was incredible. It was exhilarating being there and it was great knowing why we were there."

He added that he was shocked to see how damaged some parts of the city still are, six years after Hurricane Katrina. "You go anywhere in the downtown core or the French Quarter, Bourbon Street, wherever — it all looks fine. It looks like it hasn't been touched. But you take a trip down any back street or even a couple of the main streets we took, the houses still have the markings on them from how many people were dead, and all the windows and doors are still boarded up ... There are vacant lots where houses just floated away."

Pollard worked with a few other students to scrape the paint off the outside of the house and replant some trees on the property. "The lead guy on the project told us that what we had accomplished in that three days would have taken a crew of four or five guys a couple of weeks to do. It was nice to hear that we sped up the process a little."

"It was a great experience, and I know I'm not the only one who got something more than just my community service hours out of it," he added.

"A lot of people think that Katrina is done - it's all cleaned up and everything, but it's not," said Schonemann. "Predominantly, the only people who are still building are the volunteers. There's a lot of work to be done."

"They say a disaster takes five years to recover from, and a catastrophe takes 10. Katrina was definitely a catastrophe," she added.

Are you protected against mumps?