The Tories won. Get over it.


Editorial opinions or comments expressed in this online edition of Interrobang newspaper reflect the views of the writer and are not those of the Interrobang or the Fanshawe Student Union. The Interrobang is published weekly by the Fanshawe Student Union at 1001 Fanshawe College Blvd., P.O. Box 7005, London, Ontario, N5Y 5R6 and distributed through the Fanshawe College community. Letters to the editor are welcome. All letters are subject to editing and should be emailed. All letters must be accompanied by contact information. Letters can also be submitted online by clicking here.
Can we stop with the fear mongering now? Our next Prime Minister Stephen Harper really isn't the Devil in a flesh made suit. I mean really, the Devil may be evil and all, but he's always been linked to fun kinds of stuff, and has Harper ever been described as fun? But this transplanted Torontonian (yes, born and raised in T.O., no wonder he looks out of place wearing a cowboy hat) who's become the poster boy for the western Canadian boogeyman needs to catch a break. 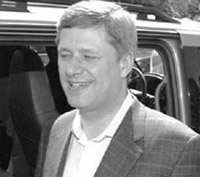 I'm at a loss to explain why urbanites loathe Harper. There are many policies in the Conservative agenda that will benefit Canadians. While I may not agree with all the policies, they do resonate with a lot of other people, and aren't elections all about buying votes with popular policies, even if it is your own money?

When Harper assumes the office of PM in the coming days I'm afraid the scare tactics will rear their ugly head in due time. As soon as some backbencher dredges up the same sex marriage issue for a free vote in the House, the Conservatives will be branded as a bunch of western religious zealots unworthy to govern. Ditto on the abortion issue. Newsflash, it's not a Conservative majority and Harper knows well enough that any free vote in the House on those two issues, in this particular parliament will mean holding up the status quo. A decision that I believe Harper can live with, as it pacifies a segment of his party who want these issues revisited, while also pacifying urbanites who don't want to rollback the clock.

What we won't be hearing about during the life of this incarnation of parliament is about all the left-leaning, wingnut liberal commie pinkos, more interested in handouts then handups. Not that we ever hear about these people, or that the Liberal and NDP party's may be riddled with those types of people. Maybe we'll finally see the Hidden Agenda that many have been traumatized to believe will happen when Conservatives take the reigns in Ottawa. I suspect it will include good governance and hopefully accountability. If it doesn't, then the Conservatives will have no chance in forming a more stable and longer lasting government whenever the next election happens to come in at least 18 months or so. Of course the Conservatives can orchestrate their only failure sometime just before the Liberals elect a new leader or just after, when the Liberals will still be trying to organize themselves in attempt to hold onto power. Sort of like what former PM Jean Chrétien did to Stockwell Day and the then upstart Canadian Reform Alliance Party in 2000 just after Alliance and Reform merged, but I digress.

For the time being we should all watch carefully the goings on in Ottawa and judge the Conservative government on their record, which happens to be a clean slate at this time, not on what all the pinko commie fear mongering suggests might happen. To do otherwise would be a disservice to our elected government and Canadians in general. The Conservative Party has earned the right to govern now let's sit back and let them do what they were elected to do.

John Said can be reached at johntsaid@yahoo.ca