Volkswagen is German for the Peoples Car, and when the first one came out after WWII, it sold by the bucketload.

The original Beetle has had just about the longest production run of any car ever made. It was a huge success (obviously), especially with the hippy crowd. So, when back in the 90's VW wanted to recapture that success, they introduced an all-new Beetle in 1998. Much to VW's delight, it was a huge success; again they were being sold by the hundreds, and buyers were willing to pay well over list price to be the first ones to have it. 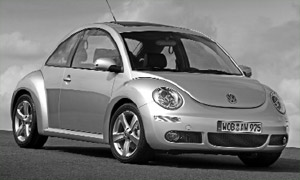 As time went by, sales started to slow down despite annual improvements, and despite the introduction of a convertible version. Now for 2006, there are a few more changes, but I am not sure they are for the better. VW has changed quite a few body panels on the car, and the end result doesn't look as cute as the 1998 car did. It just goes to show that you can't improve on perfection. I don't like the new front and rear bumpers, and the taillights don't look right either.

However, one thing has been vastly improved, and that is the engine. In the past, you'd get a weedy 2.0 litre, four-cylinder engine in your base Beetle, which made a paltry 115 hp. Since the engine wasn't very powerful, it revved like mad at highway speeds. At 120km/h (yes, I know that is above the speed limit) it revved at 3900rpm. So, it was a buzzing Beetle. Now, you get a new 2.5 litre, five-cylinder unit in the base car, which makes a much more pleasing 150 hp, and thus at 120 km/h, this Beetle revs at 3100rpm; that is much better.


Yes, I did mention the word pleasing there, because it is a hoot of an engine. VW says it is actually one-half of a Lamborghini Gallardo's engine (the Lambo has a 5-litre, V10) and I believe it. It certainly has the attributes of a Lambo engine it revs hard, it sounds good, and it has a slight drinking problem.This new Beetle drinks a bit more than before, but I didn't care, it is just so much fun to drive it hard.

It's one of those engines that just puts a big smile on your face every time you make a gear change. My test car had a five-speed manual gearbox (a six-speed automatic is also available) and what fun it was. In the beginning, the clutch took a little getting used to, but I got used to it in no time.

It is one of those cars you'll just take out for a drive, just for the hell of driving. It is that much fun. Just be sure you check the weather before you take it out because this car isn't very good in winter weather. My test car even had winter tires, but this car was very twitchy. It slid around as if it was an ice skater, and you really needed to be masterful in terms of car control to make sure it didn't bump into things.

On dry roads however, it handles quite well. The very large steering wheel makes tossing it around corners a bit awkward, but nothing to steer you away from buying one.

The interior won't put you off buying one either. It is huge, like sitting in the middle of a dome. The seats are not the most comfortable, but the heated seats feature is fantastic. I know many cars have heated seats now, but these ones were rather toasty. You might not be able to cook burgers on them, but I can assure you that they sure keep your buns warm, even on the coldest winter days.

As for the styling it may have not pulled off a successful facelift but it still looks good, just not as good as it used to. However, thankfully pricing hasn't gone up too much. You can get a base 2.5 Bug for $24,940. A 1.9 litre, 100 hp diesel engine is also available, and base price for that is $26,230. So, pricing isn't bad either.

And one more thing — if anyone teases that you are driving a cute car, just say this: “At least my car has half a Lamborghini engine in it.” Then see who is laughing.