“Shouldn't I take you out on a few dates first?”

Chivalry and humour, it's on the top of a lot of women's "to date or not to date" list, along with, well...size does matter. 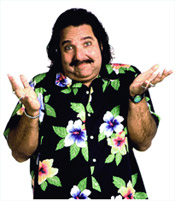 It was 1975 and the legend of Ron Jeremy had begun.

Now the man who, according to Wikipiedia.com, has starred in well over 2,000 adult films, slept with 4,000 women and directed 100 of his own movies (not all of them the adult variety) is on an international speaking tour.

“When I started making movies, they weren't even sperm yet,” Jeremy said about his recent audiences. “Colleges,” Jeremy said, “It's raves, it's spring break, it's wet t-shirt contests…” what's not to love, right?

“Once in a while you get a right-wing group,” he said; “It makes for a fun debate.”

Jeremy should feel at home at Grant MacEwan; he graduated with master's degree from Queen's College in his hometown of New York City before beginning a career as a high school teacher.

“I quit teaching to do some acting, that's all,” Jeremy said. Going back into teaching is something he doubts he will do again, but the prospect is always there if he feels like it. Jeremy suggested that there would probably be a parents coalition group akin to Mothers Against Drunk Driving (MADD) opposed to him teaching again; Fathers Against Ron Teaching (FART).

There's that humour again, but what about l'amour?

The man knows what he's talking about.

“Men are better in the recreational sex department…but women are learning too, a lot of them,” he said. “Love is obviously a lot more powerful.”

“Sex causes all these amazing feelings. You can have sex with a lot of people…romance you can only have with a few,” said Jeremy.

Jeremy admits to having a few “special relationships,” but also admits that he has had his heart broken too, “There's no comparison to what you go through,” he said.

“It's not that taboo actually, it's becoming more acceptable. Look at Europe for example…Amsterdam.”

Unfortunately An Evening with Ron Jeremy is only a one-night stand, just accept it for what it is and enjoy yourself.