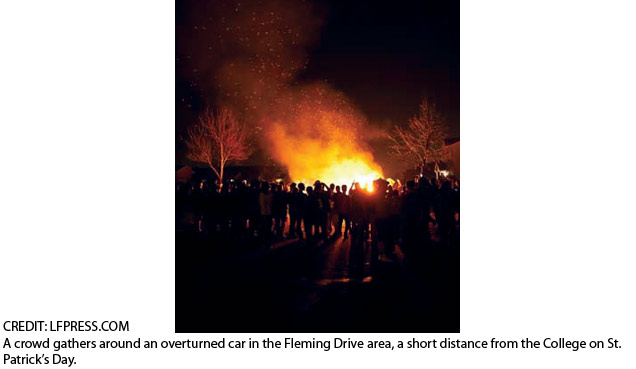 On the night of March 17, St. Patrick's Day celebrations on Fleming Drive spiraled downward into a full-blown riot. The City of London, London Police Service, Fanshawe College and the London community as a whole have been left trying to figure out what to do with those who participated in this act of civil disobedience, how this happened, how it can be prevented in the future and how the reputation of Fanshawe College can be repaired.

Fleming Drive has a history of incidents similar to this one, though they were typically on a much smaller scale. The area has gained a reputation for its parties and draws crowds from other postsecondary schools, other cities and even area high schools.

Marty Thompson, a first-year Broadcast Journalism student at Fanshawe, was in the area at a friend's house on St. Patrick's Day. He described how the events unfolded that night, noting that the entire incident started with a couch that was set on fire, something that has happened on Fleming Drive many times in the past. He said that with the crowd acting violently towards emergency service workers, he was surprised they weren't acting violently towards each other. “I never felt in danger. It was surreal, for sure ... It was just a bonfire. It felt like that. It felt like people were (just) gathered,” he said.

During the riot, 1,000 young people took over Fleming Drive, flipped over and lit a CTV news van on fire and added furniture, TVs and propane tanks to that fire, pelted police officers, fire crews and EMS with bottles, wooden boards from fences, car tires and hub caps. In total, 17 police cars were damaged and the overall destruction is estimated to have cost the city over $100,000.

Some of the young people involved in the riot took to various social media sites including Twitter and Facebook to brag about their involvement. Since then, screenshots of these posts as well as photos of people involved in the riots have been added to the Fleming Riots St. Pat's Day 2012 Facebook page (tinyurl.com/flemingriots) to assist police in identifying alleged rioters.

Of those charged, six are currently Fanshawe students and have since been given interim suspensions.

Dr. Howard Rundle, President of Fanshawe College, said in a press conference on March 19, “Fanshawe's Student Code of Conduct does reach into the community when the actions of a student impacts the safety and health of those in the college,” stating that students who are convicted of charges relating to this riot could face expulsion.

“Someone that would throw a brick at someone else, someone that would start a fire. That, to me, that's not only a criminal act, (but) that kind of person is dangerous on our campus. We don't want them here and our policy does allow us now to have them removed,” he added.

Veronica Barahona, President of the Fanshawe Student Union (FSU) said that the union supports the college's decision to expel those students who are convicted. “I think that in this case we have to follow suit with whatever the College moves forward with. I think that when it affects the health and safety of our students ... it's detrimental,” she said.

“In the future, the college and the Student Union need to tread cautiously and follow the Student Code of Conduct (when considering expulsion),” she continued.

London Police Chief Brad Duncan said in a press conference on March 18, “To the students and others who committed these criminal acts, we are engaged in identifying those involved. We are already receiving many tips with respect to the responsible parties and there will be further arrests and charges in connection with (the riot).”

The London Police Service (LPS) and Fanshawe College have worked together numerous times in an effort to prevent occurrences such as this one from happening. Project L.E.A.R.N (Liquor Enforcement and Reduction in Noise) is a collaborative project between the LPS, Fanshawe College and the University of Western Ontario dedicated to reminding students who come to London in September to be respectful.

“The Fleming Drive area has been the subject of much discussion over the past several years and recently our efforts during Project L.E.A.R.N, our fall back-to-school initiative, (were) seemingly making a big difference in terms of negative student behaviour,” said Duncan. However, this riot has left many wondering whether or not young people in the Fleming area actually got the message.

“We're very proactive through Project L.E.A.R.N. and we try to get the message out to our students about the repercussions of their actions, and honestly, I think there's only so many times we can do that,” said Barahona.

Once the investigation is over, Rundle said he plans to sit down with LPS to find more ways to prevent these incidents. “I'm not the expert to tell them, I want them to suggest to us the things we should do, what our responsibilities should be, what should the Student Union be doing. Is there something? I don't think handing out flyers the day before St. Patrick's Day is going to do squat,” he said.

Rundle also pointed out a number of social issues that played a role in this riot, including society's tolerance of binge drinking, labeling St. Paddy's Day a party day, as well as calling into question some of the values being instilled into youth by parents.

Ultimately, Barahona said this issue boils down to housing. “I don't think that it's Fanshawe College, and I get really frustrated when people blame this college because it's a housing issue ... There are five students per house and about 300 houses, how many students do you have there? It becomes a party mentality no matter what we do, no matter how much effort ... We sat with Emily Marcoccia (Fashawe's Director of Marketing and Communications), LPS, the City of London, every stakeholder in the community three weeks ago and talked about our plan going forward, and this happened,” she said.

“This incident does not affect the attitude or the character of the majority of the current students, but we are aware that this incident will reflect badly on our college and the students we represent,” said Barahona.

Current Fanshawe students and alumni are concerned about how this incident will affect the image of the college and have taken action to protect their reputations. A group of students created Project Fanshawe College (tinyurl.com/projectfc) to help raise money to cover the costs of the damages caused by the riot, and some Fanshawe alumni circulated a petition demanding that involved students be expelled (tinyurl.com/alumpetition).

“I think the starting thing is really being seen to be punishing those who are clearly guilty of what they did and having the whole community see that,” said Rundle, discussing how the college is working to maintain their positive reputation. However, from his perspective, the only way to really ensure that this type of event is avoided in the future is by dealing with the Fleming Drive area itself. “Is it possible to break up that enclave? Because if that could be done, this would never happen; it can't physically happen,” he said.

Anyone with information regarding the riot is encouraged to contact LPS at tips@police.london.ca or by phone at 519-660- 5842, or contact Crime Stoppers at 1-800-222-8477. Fanshawe College has also set up a secure email where people can send tips: flemingdriveincident@fanshawec.ca.

Rebuilding after the riot