Fanshawe athletes win in the classroom


Fanshawe athletes have long been known for their performance on the court and field, consistently bringing home awards and medals as proof of a team's dedication to their sport. But between practices, games and tournaments, the athletes still have to study, attend classes and pass tests. In fact, if they don't maintain a 2.0 GPA, they can't even play for the Falcons.

In an effort to honour both the athletic and academic achievements of Fanshawe's athletes, the Student Union presented a number of players with the Fanshawe College Athletics Achievement Awards last Thursday. Emily Costello, Greg Remjin, Chase Howard, Justin Guerin and Ryan Corby were given a $500 per semester award to recognize their hard work both on and off the field. 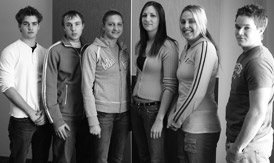 “We are very pleased to have these awards to recognize [the students] with,” said Cathie Auger, Vice-President of Student and Staff Services. “We've seen the results today, and its great.”

In order to keep the heat on during games, Fanshawe diligently searches for the most promising high school players. And to convince these stellar athletes to choose Fanshawe, the Athletics department also offers Athletic Entrance Awards. This year's recipients were Amy Smith, Katie Seys and Dan Gaffrey.

This is only the second year for both the entrance and the achievement awards, but they are proving to be a great way for the FSU and the Athletics department to recognize extraordinary new and returning athletes.

“The entrance award was added as a coaching tool to recruit top athletes to come to Fanshawe,” Athletics Manager Mike Lindsay said.

While most sports have one entrance award each, teams are being encouraged to ask community businesses to sponsor an award and increase the number of awards available each year. Lindsay said that this empowers the athletes and coaches to get more involved in the awards and build support for their sport.

If the entrance award is not used in a particular year, it is then changed into an achievement award and given to a current outstanding Fanshawe athlete, as was the case for some teams this year.

The recipients for both the entrance and achievement awards are nominated by their coaches and selected by a panel of College, Athletics and FSU representatives.