Green Day teaching fans how to be an American Idiot

Hailing from Oakland California, Green Day has been popular in the rock mainstream since their 1994 major label debut Dookie. The trio of singer and guitarist Billie Joe Armstrong, bassist Mike Dirnt, and drummer Tre Cool have eclipsed the immaturity of the '94 release and reached new heights with their 2004 album American Idiot.

“American Idiot, after we recorded it, we knew we had accomplished something that was completely above anything else we had ever done,” Dirnt said on Green Day's 2005 DVD Bullet in a Bible. 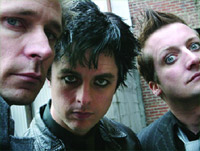 Not typical to previous Green Day releases, that generally consist of short, simple songs, American Idiot was constructed into a type of “Rock Opera” that had been very rare in the music industry.

“We were like, this is what we should be doing, this is how we're really getting our rocks off right now. Let's just be ambitious as hell and go for it,” Armstrong said on MTV.com.

The entirety of American Idiot takes listeners on a journey, introducing characters along the way, that all affect the life of an individual that represents the title of the album.

“I wrote a lot of songs when I was going on walks and I was kind of thinking who is the American Idiot? What is this person, who is that guy? What character is going to come out of that, who is it?” Armstrong said.

The easily influenced, and troubled character depicted by Green Day on the album goes through life and subsequently the album facing many challenges related to past childhood memories, relationships, drugs, and war.

“I just remember going on this walk thinking, I'm the son of rage and love, Jesus of Suburbia. I mean those two lines right there for me were, oh my God, it was opening up something that not only was completely a new thing but there was something about it that dug up some past demons that seemed like you closed off a long time ago but you never reconciled with, and then those two lines came out and they excited me and scared the living piss out of me at the same time.”

The nine minute long epic “Jesus of Suburbia” is one of five number one hits released off the album including, the title track “American Idiot”, “Bouelevard of Broken Dreams”, “Holiday”, and “Wake Me Up When September Ends”.

“This is truly inventive and emotive stuff, and arguably Green Day's best work to date,” Richard Banks of the BBC said in a review of American Idiot in September of 2004.

Green Day was recognized for their efforts by receiving the 2004 Grammy for Best Rock Album, and recently the 2005 Grammy for Record of the Years for “Boulevard of Broken Dreams”.

The bay area trio began their global romp for American Idiot in the summer of 2004 and just finished in October of 2005. Green Day's world tour, which included shows in England, Germany, and the United States also included a stop at the John Labatt Centre here in London Ontario on May 4th, 2005.

Green Day plans to rest and take some much deserved time off before going to work on their next studio album.