MONTREAL (CUP) -- I have a bias to former MuchMusic VJ George Stroumboulopoulos. Apart from validating my predisposition to MuchMusic with his brains, he also happens to be pretty hot. Fortunately, he's moved on and uses both assets to attract viewers to his hour-long news program, The Hour, which stopped by Montreal to tape an episode for its cross-Canada tour.

Dressed all in black, offset by silver from his studded belt and nose ring for the taping stint at the Cabaret, Stroumboulopoulos resembles Johnny Cash with a heavy skater punk twist. Similar to Play, a retired CBC television show that was hosted by Gian Ghomeshi, The Hour combines news with pop culture. The premise of the show relies on Stroumboulopoulos' wit and opinions on the day's events and although there is accusations of dumbing down the news, he insists that this isn't so. "People are so busy—you can't expect them to know everything," he says citing Sudan as a complex conflict many can't follow. 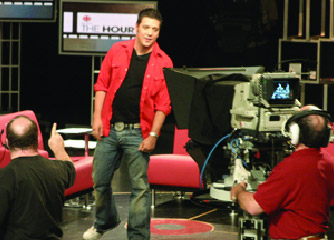 While his no-nonsense 'tude and aw-shucks presence bring in a predominant teen girl audience, Stroumboulopoulos manages to detract trivialities with his employ of other serious issues. Stroumboulopoulos listens intently to the questions, peppering his speech with "shit" and "dude." The show is almost like a going music show, except the star rocks the mic reporting the news. Stroumboulopoulos quips, "We're [the show] like a hip hop tour, we do a show and then take two months off."

He insists that the show isn't targeted exclusively at youth, as many critics claim. "Everybody knows, if you target [youth], you don't get them." He adds that the show is for any ages, "my grandfather and nephew can watch the show, and that's good enough for me." In the past, the show has produced a diverse range of guests including CNN ranter Tucker Carlson, AIDS activist Stephen Lewis to Canuck comedian Rick Mercer. Notable guests for the Montreal taping were Olympic medalist Mark Tewksbury and Concordia history Professor and member of Montreal Institute of Genocide and Human Rights Studies Frank Chalk.

The 33-year old appears equally cool but speaks at an almost meth-induced pace as he reports the day's various events between montages. Between reports and montages, he rants.

At the moment, it's about Condoleeza Rice and Donald Rumsfeld, their new spin on Iraq and its ineffectiveness on him. After showing a clip of Rumsfeld demanding good news on the Iraqi war and admitting that he doesn't watch the news followed by violent footage of the war, a deadpan Stroumbo responds to the footage to the audience, "Where's the good news, my friend?"

The trivialities of pop culture are also addressed in the show. A quip on recently jailed Li'l Kim induces a laugh when he says, "She's probably the only one who smuggles a nail file in to actually do her nails." He shifts to serious matters like the Sudan crisis and interviews Professor Chalk on the matter. After Chalk sums up the current situation Stroumboulopoulos, with a passion atypical of a news reporter asks, "Well what can we do now?" As the conversation veers towards the familiar topic of oil, S. rolls his eyes and quips, "There's that 'O' word again"

To remind viewers that the show was being taped in the city, a interview with new Montreal resident and Olympic medal winner, Mark Tewksbury was taped at Multi Mags on St-Laurent. Flipping through gay men's magazines, Tewksbury talked about the hardships of being a gay Olympic athlete. "People were like, whatever you do—don't talk about it," he said, reflecting on the days before coming out.

It's refreshing to hear the news reported by someone who seems to, well, give a shit. While the show's "Nothing is sacred" mandate seems unconventional in a space like television, Stroumboulopoulos manages to use this to his advantage and gives young impressionables the tools to "give a shit" too. CBC may have finally gotten it right with the kids.

If you have the CBC Newsworld channel you can watch The Hour weeknights at 8 p.m., if you don't you can check out its website, www.cbc.ca/thehour for more information.