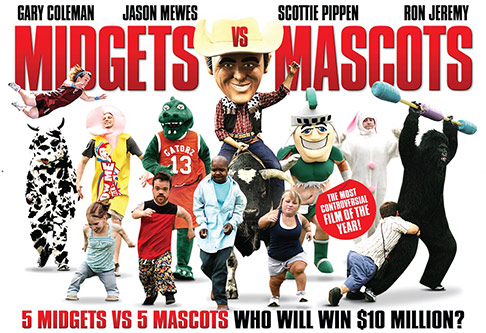 The Super Bowl just took place. The Olympics are about to begin. But the biggest news in the sports world is coming from Chicago, where Major League Baseball's Cubs recently unveiled their first mascot in the franchise's 110-year history.

Clark The Bear came out of hibernation in January and caused an instant furor. You see, Clark wears a Cubs jersey, backwards baseball cap, and no pants. The bear's pantslessness was met with nothing but growls and roars of disapproval. If the Cubs fail to win the World Series for the 106th consecutive year, it will be that bear's bare ass that gets fingered as the reason.

I'm not quite sure why this is causing such an uproar. Yogi Bear and Fozzie Bear have been parading around in nothing but a hat and tie for decades. I guess if you wear a tie, then pants and a shirt are deemed unnecessary. Let that be a lesson to you as you prepare for your next job interview. I suppose the passion that sports fans have for their teams also extends to their fake animal representations. Those representatives are a major focus of this week's film, featuring four of the biggest stars in the history of the universe.

Before I go any further, I want to make two things perfectly clear. One, I know that Gary Coleman has passed on, and will not be able to carry me to my final resting place. Comedian Carrot Top will serve as his replacement. The second thing I want to clarify is that I know the title of the film contains an offensive term. I mean no disrespect to legends such as Youppi and the Phillie Phanatic. I know the politically correct term is team spirit specialist. However, the makers of this film saw fit to name it Midgets vs. Mascots, and by golly, that is what I am going to call it.

Midgets vs. Mascots can best be described as Jackass meets Borat meets the Olympics meets a TLC reality show. When a rich little person/ former mascot passes away, his spoiled wife and son expect to simply be handed their share of his $10 million fortune. However, his will decrees that they are going to have to earn it in the most unique way. They will each coach a five-person squad — one composed of mascots, and one composed of little people. They must complete in 30 challenges in 30 days. The winning team will receive the $10 million — $5 million for the coach, and the rest will be split amongst the winning competitors.

Legendary thespian Gary Coleman leads the little person team. Younger readers might not recognize the name, but I'm sure you are aware of his catchphrase, “What'chu talkin' 'bout, Willis?” It is one of the most uttered phrases in the English language, behind only “Hello, how are you?”, and “Please pass the marmalade jar.” Midgets vs. Mascots was Coleman's last film before his death, and he truly saved the best for last. Whether he was chugging milk, wrestling an alligator or assaulting former Chicago Bulls star Scottie Pippen with a telephone, Coleman truly gave it his all in this movie, perhaps knowing that this would be his last job. After seeing this film, it makes me even angrier that Elton John didn't record a version of “Candle In The Wind” for Gary when he died.

Some critics have said that Midgets vs. Mascots is not a film for everyone, because it contains material that may make some people uncomfortable. But, like a horse who can't spell, I say nay to that. About a decade ago, millions of moviegoers — including me — went to the theatres to see a film called The Passion of the Christ. It was certainly uncomfortable watching Jesus brutally punished for over half an hour, but we all went anyway, because it was an important film. The same can be said about Midgets vs Mascots. Sure, there is lots of profanity. Sure, there is a scene where Gary Coleman sports a prosthetic penis. And yes, several little people vomit after chugging milk. While many of us may hear or see things like this on a daily basis, I understand that these things might make some a little squeamish. However, it is an important film, and I feel viewing it should be mandatory, especially in our school systems.