Sorry I missed my chance to give you my two cents on the WWE last week, but unfortunately I couldn't get an article in on time! As for this past week's programming, Smackdown actually had more to offer than Raw, but that's because Raw's show was the traditional “let's hype the next Pay Per View” Raw where nothing happened because they're saving all the action for the PPV. 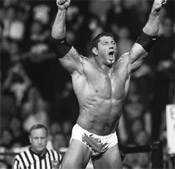 Instead of commenting on a week's worth of WWE programming, I'm going to give my predictions on the next WWE PPV, Unforgiven.

Trish Stratus and Ashley vs. Victoria and Torrie Wilson
T&A! That's all this match is. I'll be surprised if Ashley (who is damn hot) will be half as ready as Christy Hemme was for her first match. I think this is just some good T&A for the fans and an opportunity for Trish and Victoria to build steam for their upcoming feud. Up until last Monday's Raw, I forgot Trish was the women's champion. Don't they strip wrestlers of their titles if they're out for months? Oh yeah, there are hardly any women wresters anymore to give the title to. I predict Trish and Ashley taking the win.

The Hurricane and Rosey vs. Murdoch and Cade
Does anybody care? There are hardly any valid tag teams anymore and I'm going to predict that Murdoch and Cade will take this because (if I remember correctly) in the last Ross report, good old JR mentioned something about tag team wrestling getting hyped up again. What better way to hype up tag team wrestling with a title change and an actual TEAM having the titles.

Big Show vs. Snitsky
The WWE should have let this one get a little more personal or let these two trash each other on the mic to build it up. I thought that these two fought on Raw already and the Big Show won without a problem. I'm sure that happened because I remember shaking my head and thinking that they should have built that sucker up and put it on a PPV. Well, now it's on a PPV without any hype and the Big Show coming out on top again, just like he did before.

Edge vs. Matt Hardy in a steel cage.
Here we go: this is some PPV goodness AS LONG AS THEY DON'T STOP THE MATCH LIKE THEY DID THE LAST TIME! For the love of God, the WWE better not mess this one up. I want to see action! I want to see BLOOD! I want to see the WWE give Matt the win he deserves. But then again, Edge holds the briefcase and is still preferred backstage by the WWE than Matt (or so it seems). I'm going to cross my fingers and give this one to Hardy…but just barely.

Ric Flair vs. Carlito for the Intercontinental Championship
Carlito is a chump and I can't stand his wrestling or his mic work. Some people like him because he's arrogant and he reminds them of an early Rock on the mic. I think that the WWE is going to give the win to Carlito because they want to continue to push him. With Flair being the dirtiest player in the game and Carlito trying to be a heel champion, there will be a disqualification and Carlito will retain the belt.

John Cena vs. Kurt Angle for the WWE Championship
This one is going to be an awesome match. Angle will work with Cena to bring him to new heights. The match is going to be a classic back and forth battle but I see that the WWE is already advertising Angle and Cena matches for the next few months, which means the angle (no pun intended) will continue with Angle pursuing the belt. Cena won a handicap match between Tomko and Angle last Monday on Raw, so I don't think the WWE will allow the belt to change hands at this PPV. Survivor Series is where it will happen.

Peter Wilura can be reached for PPV showtimes at popeyepopsolive@hotmail.com