Cinema Connoisseur: No Holds Barred holds nothing back


No Holds Barred (1989)
With 24” pythons, a truckload of charisma and a moustache that put those of Tom Selleck and Saddam Hussein to shame, Hulk Hogan was on top of the world in 1989. He was the World Wrestling Federation champion, and his image was used to sell action figures, ice cream bars and vitamins. The man could have rested on his laurels, especially since those laurels were 72” and weighed over 400 pounds, thus were an adequately sized resting place for a man of his dimensions. 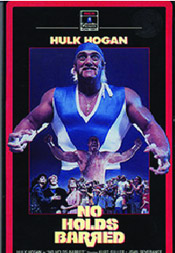 That's not the kind of man Hulk Hogan is though. He decided to branch out, and try to pile-drive the one opponent he had not yet defeated — Hollywood, with his first starring role in No Holds Barred.

Hogan did have a brief but memorable role as Thunderlips, The Ultimate Male in Rocky III alongside Sylvester Stallone and Mr. T. However, before he got the chance to springboard to the top of the Hollywood ladder, to find his rightful place beside Tony Danza and the guy who played Mr. Belvedere, Hogan got sidetracked defending his WWF Championship.

Really, who has time to be attending Oscar ceremonies and film premieres when you've got King Kong Bundy and “The Uganda Headhunter” Kamala breathing down your neck?

In No Holds Barred, Hogan played Rip, a professional wrestling champion. Rip is the number one draw on television, and so it comes as no surprise that the World Television Network (presumably a division of Generica Industries) is interested in having Rip come over to their network. Brell, the head of WTN, offers Rip big money to jump over to the network, but the champ refuses, showing he is a man of honour by living up to his current contract. Brell goes ballistic after Rip's refusal, and refers to him as a “jockass” — that's not a typo folks, that's the brilliant and imaginative writing of Dennis Hackin.

After attempting to have Rip killed after leaving the meeting, much like ABC tried to do to David Letterman, Brell concocts a evil series of attacks to bring Rip over to his network.

First, he convinces one of his employees, Samantha, to seduce Rip so that he'll be more responsive to their offer. This plan has one fatal flaw - that being the fact that Rip happens to be the sexiest jockass to ever walk the face of the God's green earth. It isn't long before Rip puts a headlock on her heart, and executes a reverse arm-lock to her vagina, as she falls madly in love with the big guy.

Brell's second plan meets with far greater success. While visiting a rundown bar, one that has a trough in the bathroom instead of separate urinals, Brell witnesses a tough-man competition. The winner of this anything goes affair, Zeus, impresses him so much that Brell creates his own tough-man contest on WTN with Zeus as his big star.

After an unanswered challenge from Zeus to Rip, Brell takes it up another notch by beating Rip's younger brother Randy within an inch of his life. Now you may be asking yourself why Rip hasn't contacted the police at this point. Both his brother and himself have nearly been killed for the sake of Nielsen ratings. Well, maybe Brutus “The Barber” Beefcake or The Iron Sheik would go running to the police, but that's not the way Rip handles things. Rip accepts the challenge, and the two meet in a titanic struggle. Who wins the big match? You're just going to have to head over to your nearest DVD retailer to find out!

Whether you're a fan of professional wrestling or not, No Holds Barred will grab hold of you, and put you down for the three count. I'm not sure what that last sentence means. I really should have stopped writing after the last paragraph.