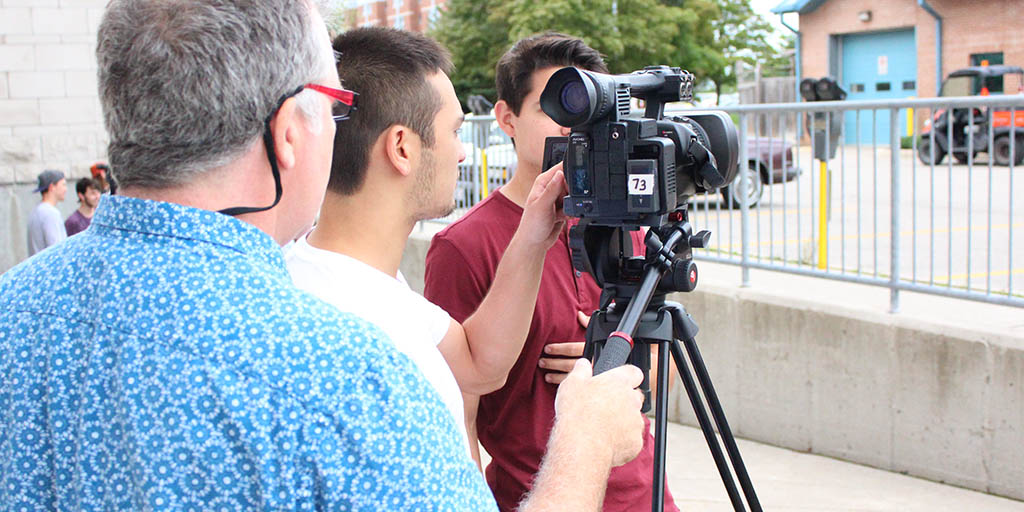 
Broadcast television students at Fanshawe have been given the opportunity to collaborate with Rogers for a mini series about Fanshawe as a part of their program curriculum.

The broadcast television program at Fanshawe is a two-year course that develops students’ skills in areas such as broadcast and technical operations, studio production, ENG/EFP production, computer graphics, post-production editing, copywriting, scriptwriting and sales and marketing for television.

With access to Fanshawe’s onsite studio, students have the opportunity to work behind the camera for multiple projects including shooting shows, and news and entertainment pieces.

Previously, Fanshawe TV produced a show called “On Campus” that had been offered to Rogers as well as aired on Fanshawe TV throughout the campus. The production was incorporated as a major term project in the second year production course; however, this fall season the production professors decided there needed to be a change.

“Marilyn Buggy (Rogers TV producer) and I met and discussed a new show. Marilyn previously taught part-time at Fanshawe and is back this year teaching part-time for the production course along with Romy Goulem (professor in the advanced filmmaking and broadcast television programs at Fanshawe) and Duane Denim (part-time professor, as well as a CTV2 producer),” said Laurel Hardie, professor of broadcast television media programs.

The program’s television section has had student-produced content aired locally on both Rogers TV London and CTV2 (CFPL-TV) in the past. The TV show project has been incorporated in the curriculum for over 25 years.

“We got our students involved in a show called “On Campus” with CFPL-TV that showcased stories from the campuses of Fanshawe and Western. When the show was cancelled, we incorporated it into our curriculum. Our television program and our students benefit from, and value, the support and collaboration we have with our local, regional and national media industry,” Hardie said.

The show is expected to primarily showcase the grads and alumni that are now working in their respective field of study. The goal of the assignment is to highlight two programs for each episode, which will include feature segments with interviews from the program co-ordinator, professor, and the graduate. Comments from current students in the TV broadcasting program will also be included.

“[There will be] lots of visual footage of the program facilities [and] students working and learning will be used in conjunction with the interviews. The camera crew will also go ‘on location’ to capture a sort of ‘day in the life of’ the grad/ alumni at their place of employment,” Hardie explained.

The show, which has yet to be named as a part of the development process that students will go through, is projected to be announced by the beginning of October.

“It will involve brainstorming, clustering of ideas and focus groups to determine the show’s name,” Hardie said.

Jordan Crow, second year student in the broadcast TV program talked about his excitement to collaborate on the project with Rogers.

“I think it’s really cool to get the real world experience. It’s something that not a lot of colleges have and it’s really interesting to collaborate with real professionals in the industry and get a project off the ground and on TV,” Crow said.

The show will have four episodes with students being divided into four groups of 21 students. Each class is expected to produce one full half-hour episode and two web episodes that are between three to five minutes each.

“The shows will be delivered as completed production programming at the end of the term as part of their major project assignment. It should be airing on Rogers TV and Fanshawe TV by Dec. 15,” Hardie said.