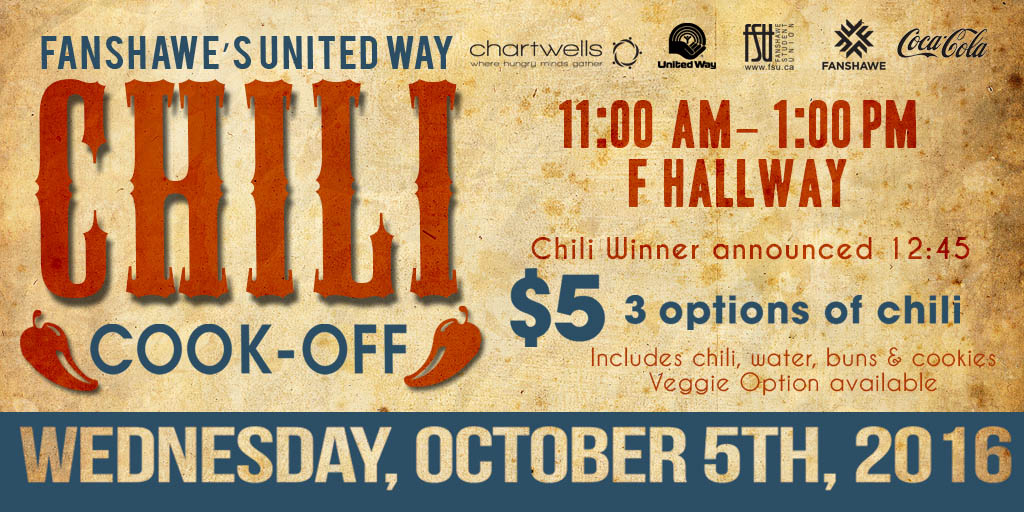 Though the annual chili cook-off will help launch Fanshawe's United Way campaign, there are a few new changes to how the campaign will work.


The annual kick off to Fanshawe’s United Way campaign is off to a different start this year, but will still include the much loved chili cook-off.

The annual cook-off, to be held Oct.5 this year in F hallway, includes chili created by three different venues, including the Fanshawe Student Union (FSU) through Oasis and the Out Back Shack, a group from the School of Tourism and Hospitality and Chartwells.

For $5, students and staff can sample the chili, get a bun, cookie and water, which is all donated by Coke, according to Carol Balzer, FSU’s administrative services manager. Balzer has been in charge of the chili cook-off for the last four years, after first volunteering and being on the United Way committee.

Those who test out the chili vote for the best one and the winning team will receive a trophy.

The power is in the hands of the taster.

All the food and products needed to make this a successful event are all donated, and the proceeds all go to the United Way, Balzer said.

Balzer said from the cook-off point of view, everyone is all set to go.

“All the areas are good and excited and ready to take home the trophy. There’s always some stiff competition,” Balzer said.

The goal for the entire campaign this year will be similar to last, though hopefully it will be more according to Balzer who is hoping for roughly over $100,000.

As for the chili, $1,000 is the goal, but more is always welcome. Balzer said the team is hoping to serve 200 portions of chili.

One of the main things that is different this year, according to Balzer is that instead of announcing the goal for the campaign and having United Way guest speakers at the cook-off, there will be an e-launch sent to staff on Oct. 3, which will explain all the details of the campaign.

“It’s really hard to get people down to an event at lunch time, all at the same time, so we are finding we would have all these people speaking and the message wasn’t getting out… it was hard to capture an audience,” Balzer said. “So we think it will be better spreading it through the masses on the Internet and sharing stories through that. Hopefully we’ll reach more people.”

Candace Miller, Fanshawe’s chair for the United Way campaign this year, said the official launch of the campaign will be on Oct. 3 with the e-launch, but the first official event associated with it will be the chili cook-off.

Miller said that on top of some of the usual events that are put on to support the United Way, there will be a few new events put on as well.

Miller said she is excited about these changes, with one being a new incentive program that will allow staff to learn a bit more about what the campaign is all about, and how they can get involved.

Another new aspect of the campaign is more student engagement, Miller said.

“[Part of our initiative] is really to help students know that there’s more ways to get involved than just donating,” Miller said. “[By] volunteering, participating in whatever way they can to that doesn’t necessarily require a full-on donation.”

Miller said there is also a big push to get students more aware by reaching out through social media.

This year will be the first time that Fanshawe will be using their main social media pages to drive traffic, posts about upcoming United Way events and get more students involved in helping the campaign become an even bigger success, according to Sarah Carruthers, Fanshawe’s communication marketing and a social media specialist.

Carruthers said the big drive will be on the college’s Facebook page, which will post about events, while the school’s other social media channels will have pictures and final notices about events on campus.

Miller said this push on social media will be a good way to get students more aware of what the United Way does, and will hopefully get more students to volunteer.

United Way’s campaign this year is called Ignite Possibility, which Miller hopes will be showcased with more students volunteering.

“I think the biggest thing from a student perspective is we’re really trying to connect with the students and to be able to offer these opportunities and have them see the value and how it impacts the community,” Miller said.