Hand deodorant to rid of that post-hockey stank 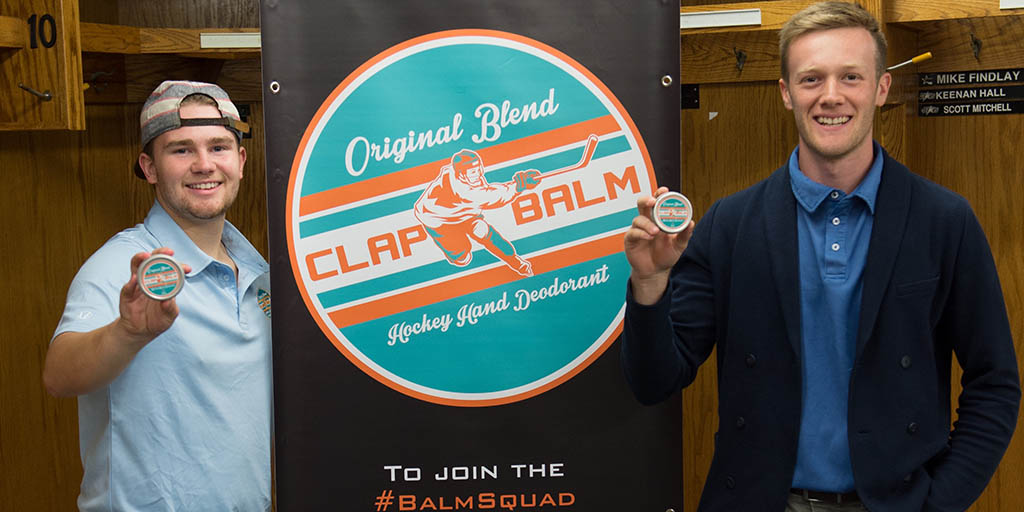 
At just 21, Matthew Laberge, a first year Fanshawe student working to get his business management degree, in collaboration with Dan Black, a 20-year-old business student at Western University, has invented a product that rids the stink that seems to seep deep into your hands after removing your hockey gloves.

“Every hockey player has the problem [that] your hands stink [post hockey], even if you shower 10 times, it's still there,” Laberge said.

That was the problem Black set out to solve, with a couple of natural ingredients, some research and his kitchen.

The process to find the perfect blend of products did not come easily however, as neither Black nor Laberge are science majors. But with a little bit of research and a lot of ruined kitchenware, the deodorant started to come together.

“They either smelled awful or they didn't work or they wouldn't even rub into your hand,” Laberge said. “We ruined pots in Dan's kitchen, we got kicked out of Dan's kitchen, it was absolutely an adventure, but once we got it, we knew we had to do this for real.”

After numerous tries, the final three ingredients that worked together in order to combat the smell were zinc oxide, sodium bicarbonate and essential oils, the latter being the ingredient they can play with to make different scents.

A year ago, they came out with the first prototype flaunting the title of Clap Balm.

Shortly after their initial launch, the duo had 400 tins sold within the first seven days and soon realized they needed help with production.

“Now it is professionally manufactured, we aren't PhD's, we're not chemists, so we let people do that for us and then we've kind of connected through the hockey world and put it out there.”

And with a product which helps rid of such a vile scent, they have acquired the likes of a few NHL players and a well-known country singer, Chad Brownlee.

“We have NHL-ers using it, Bo Horvat from Canucks, Dylan DeMelo who plays for San Jose [Sharks], Derek Mathers in the AHL, so it's going well,” Laberge said.

Now businesses around Ontario are beginning to take notice as well, with Herm's Sports Exchange and Pete's Sports taking on the product to sell in the next week.

Locally at Fanshawe, intramural hockey player and recreation and leisure student, Matthew Hopson, and extramural hockey coach Knyvet Carson, both see the benefit of this product.

“I would definitively try it out and use it for my kids,” Carson said. “I would also have my other son use it after karate as their sparring gloves are just as ‘ripe'.”

Hopson had a similar opinion, but instead wanting to use the product for himself.

“Man I smell like crap after hockey, so that'd be good.”

The Clap Balm can be purchased for $10 and can either be purchased online at clapbalm.com or in the local retailers once the product becomes available.