Student leaders shut down stigma in "You Don't Say" campaign

Messages such as these ones voiced by student leaders around campus will be popping up on the walls of Fanshawe in the next week.


In a continuous effort to create an all-inclusive, accepting and equal atmosphere on campus, the “You Don't Say” campaign is coming to Fanshawe.

Through a collaboration between the campus life facilitator, Jennifer Gillespie, and the sexual violence prevention advisor, Leah Marshall, student leaders from across the campus have come together to challenge oppressive language and create a dialogue about deeper social and cultural issues.

“By taking on statements or phrases that we sometimes hear in our society that are problematic and oppressive and having students say I don't say these types of things and this is why I don't say them, [this] is a good conversation starter,” Marshall said.

The idea for a campaign came to Marshall after seeing Duke University's campaign in 2014, where they used their student-athletes to hold up messages they don't say and why they don't say them.

“We reached out to Duke University, to a couple of individuals who facilitated the campaign, and we said we would love to recreate this campaign on our college campus can we have permission to do that and they gave us [their] full blessing.”

But what Marshall wanted to do differently from Duke was include more than just the athletes.

“Our hope was to focus on leaders from many different places, we know student leaders exist in all different parts of campus and we wanted to highlight those voices.”

The leaders in different facets of the school were more than willing to get involved with an initiative such as this one bringing their own messages that they wish to challenge on campus.

“I don't say that's so gay because sexual orientation is not a slur,” reads Carlie Forsythe's message, the president of the Fanshawe Student Union (FSU).

According to Forsythe, this message is near to her heart and she wanted to bring it forward because people using sayings such as this one is a pet peeve of hers.

“It's the same as using the R-word, find different vocabulary for stuff like that,” Forsythe said. “You never know exactly who you're talking to and so you could be making someone feel very uncomfortable.”

Forsythe is hoping that her standing up and being one of the faces of the campaign will help start discourse among the students.

“I am hoping that it creates a conversation; I am hoping that if a student is struggling with something that they know they are welcome to come talk to me or anybody else on the posters who they see in the hallways,” Forsythe said. “I really like being out there and I like being open and a lot of my execs are the exact same way.”

In another influential part of the school, the First Nations Centre, Richard Callacott, the recipient of the First Nation Centre's Student of the Year award last year and the president of Fanshawe's jack.org, was more than willing to step up.

“I don't wear traditional clothing for Halloween because my culture is not a costume,” Callacott's message reads.

He said he hopes his sign promotes respect and tolerance for all groups in the community.

“Show respect and humility for fellow students, there's so much negativity in the world nowadays and just having and showing more compassion to fellow students [is important],” Callacott said.

The posters will be put up around Fanshawe this week and will be up for the rest of the year and in second semester there will be another release of the second round of messages. FSU, as well as Fanshawe and our community partners such as Sexual Assault Centre London, will also be running social media campaigns to pump out the messaging as much as possible.

“This initiative wouldn't be possible without the collaboration across the college,” Marshall said. “I think that is an important piece because Fanshawe is working together as a community to change a culture.”

“The goal is to start more meaningful conversations about language and how language can hurt and oppress people on campus; sometimes students might not realize how a phrase or word or term can actually really hurt someone,” Marshall said. “It's not just about saying don't say these things, it's also about having conversations about why we don't want to be saying these kinds of things.” 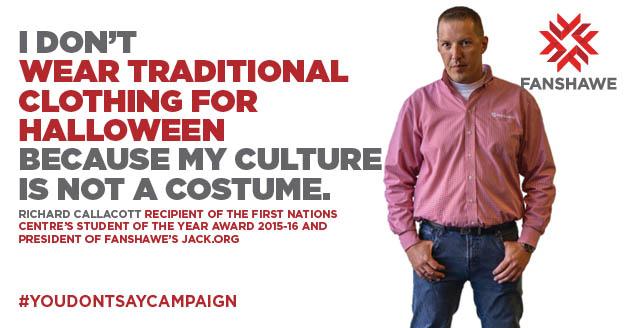