Remembrance made extra special this year 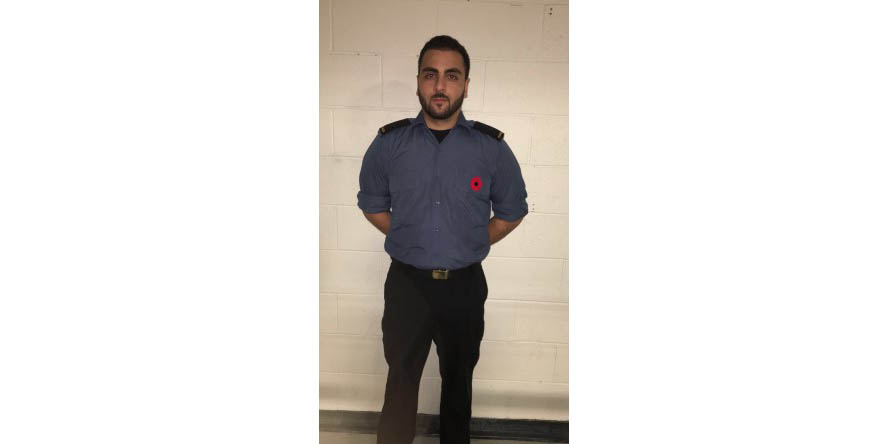 Moe Hussein is a student in Fanshawe's advanced police studies and has just begun serving his time in the Navy. This will be his first time taking part in Remembrance Day as part of the Canadian Armed Forces.


Remembrance Day is an important day for Canadians, but this year will be even more meaningful for Fanshawe student Mohamad (Moe) Hussein.

Hussein, 22, is part of the advanced police studies program at Fanshawe, having completed the accelerated course at Woodstock first, before coming to the London campus, and was recently sworn into the Navy.

“I've always had an interest in policing and this field in general ever since I was young, so I was really enticed to join the program and do what I can to become a police officer in the future,” Hussein said.

After hearing a presentation last year from a military representative while at Woodstock, Hussein got more information about the reserves and the six to eight month application process and went from there.

“I've always had a huge respect for the military, just in a broad view, so when I heard that there was an opportunity to join the naval reserves I jumped on it. It was very exciting, it was a little bit of a longer process to get in, but I was finally sworn in about three weeks ago so I'm just still pretty new to it all, but so far so good. I'm loving it,” Hussein said.

Born and raised in London, Hussein said his family is fully supportive of their oldest child and his decision, which he is grateful for. He hopes his younger siblings can look up to him as well.

“They are very proud of what I'm doing…. representing Canada, which is all I could ever ask for,” Hussein said.

Hussein is also one of his only friends to be in this field of work.

After graduating from Fanshawe April 2017, Hussein will then be shipped to Quebec for just over two months in the summer for basic training.

In order to join the navy, Hussein had to take physical and medical testing, along with an aptitude test.

Though it's been a long process, Hussein is excited about it all.

“Just to learn the sort of discipline that they teach you and to follow suit of the respected veterans that were before us as well is just all exciting and a pleasure.”

On top of school and the navy, Hussein works part-time, volunteers and tries to spend time with family and friends as best as possible.

“I love what I do,” Hussein said. “I have a pretty busy schedule, but it's all to help reach my main goal which is to become a police officer.”

Hussein hopes he can continue his time in the navy for as long as possible, and is currently learning the ropes of his position as a boatswain. This position is one of the hardest working positions on the ship Hussein said.

According to Hussein, the position requires knowing all the daily duties of the ship, including cleaning and knowing the sails.

“It's a pretty busy position, but there's always something to do in the positon of a boatswain, so that's one of the things that attracted me to that positon,” Hussein said.

In terms of his training next summer, Hussein said he's preparing himself both mentally and physically.

“From what I'm hearing, it's a lot like the movies and the TV shows… there's a lot of yelling, a lot of inspection [and] it's a very disciplined time when you're there so you got to be on top of your game all the time,” Hussein said.

Hussein said he was told to not let anything really get to him.

“It's a little nerve-racking sometimes when you hear about all these stories but it's exciting at the same time.”

Andrew Murray, co-ordinator of the advanced police studies program at Fanshawe, fully supports having students in the program also join the military.

“I think there are a lot of parallel skills that are learned in the armed forces that are particularly important and can be related to the career of law enforcement and policing in particular,” Murray said.

According to Murray, having a student like Hussein in the program and with the navy is great because it demonstrates how he can manage his time and perform well, and has learned skills with the military that are transferable to a career in law enforcement.

“With a student like Moe who can show they can accomplish both is certainly an asset,” Murray said.

Hussein is also enthusiastic when it comes to president Devlin's time in the Canadian Armed Forces.

“It's fantastic that we have that opportunity to have somebody so high up in the Fanshawe world that has served and had such a respected positon in the military,” Hussein said. “It just makes it more meaningful to Fanshawe itself, so it's definitely an honour to have him as a president and to able to know that he served and protected this country as well.”

On top of wearing his poppy as he does each and every year, this Remembrance Day will be even more special for Hussein since it'll be his first year a part of the Canadian military on this day. This position means a lot to him.

“Remembrance Day is always a day that I remembered ever since I've started school, it was such a big day no matter what school you go to and no matter where you are, you stop what you're doing and you give that moment of silence and you listen and you think about what they sacrificed for us. It's a big day for me it always has been and it's an honour to be able to be from Canada and live in this beautiful country and it's all thanks to those who served and protected us.”