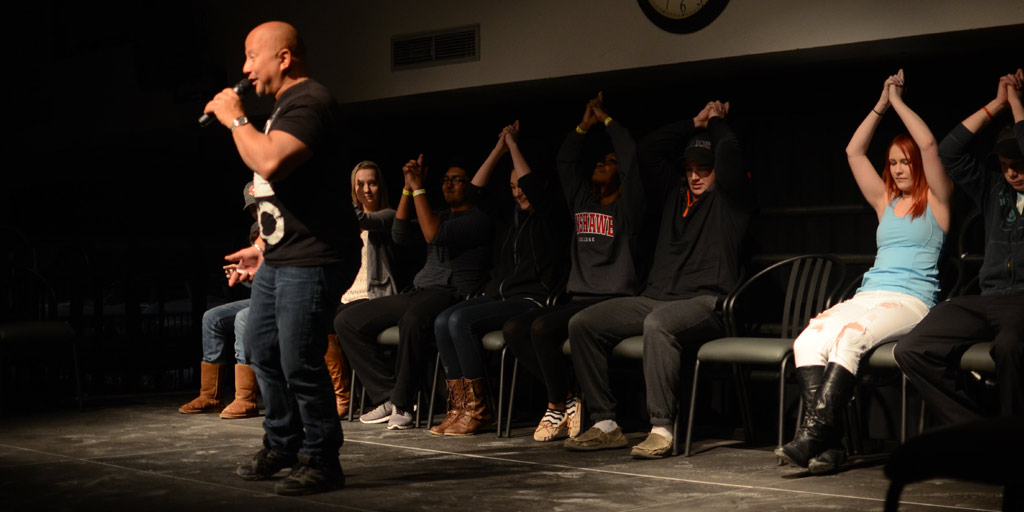 XXX-rated hypnotist Tony Lee is set to perform at Fanshawe on Jan. 24, in what will be his 40th show at the college.


XXX-rated hypnotist Tony Lee, is set to return to the Fanshawe stage in what will be his 40th time performing at the college.

“I’m looking forward to Fanshawe, I freaking love that school,” said Lee, who has performed over 9,000 shows in a span of three decades and was a 2015 Canadian Hall of Fame winner with the Canadian Organization of Campus Activities (COCA).

Though he wasn’t born here, Lee said London is like a hometown to him, since he has a number of friends in town and grew up a bit in the area.

In terms of how he started his career in the hypnosis field, Lee said it was an accidental moment with a girlfriend in the past.

“I was making fun of it. I ended up going through the motions and relaxing her and she ended up going under. It freaked me out,” Lee said. “I was curious and I started giving her simple suggestions and making her do things and then I started wanting to expand it.”

Lee took up therapeutic hypnosis and with a background in message therapy, he was able to take some courses and develop his own ways and methods of hypnosis, which he still uses in his shows today.

Lee originally had his eyes on working as a cop, but while working in the bar business, he started putting on shows and did some touring. In the midst of it all, he questioned his future.

“I’m touring around, I’m seeing the world, I literally am on stage 90 minutes at a time, I drink for a living; why would I want a normal job? It took a life of its own,” Lee said. “What would I have changed? I don’t know anything that I would have rather done than live this roller coaster lifestyle for the last three decades.”

Lee explained that hypnosis is about a relaxed state of mind and that people in that state are more “susceptible” to the power of suggestion.

Asked why he enjoys performing for university and college students, Lee said it’s the world he’s “displaced” himself into.

With a long history of performances, Lee said there have been many memorable moments he’s encountered throughout his career.

According to Lee, he’s looking forward to returning to Fanshawe since he’s in better shape and is interested in seeing how people will react to him.

Lee said though he can’t predict the responses he’ll get from the audience, he is more careful when it comes to the material in his show and changing it to make sure there’s promotion of consent, equality and showing what people want to see, over material people don’t want to see.

According to Lee, people are interested in his work because it’s different and they’re captivated by the mystery of how and why it works.

“I think it scares them [a bit], but once we explain things to people then they sit back and they have an understanding [of it],” Lee said. “We take the mystery right out of it, how and why it works and often tell people how to use it to further themselves in their own lives or careers.”

In terms of advice for aspiring hypnotists, Lee said that “all hypnosis is self hypnosis”, and if people can work on their own self-development and influence themselves through the power of suggestion to achieving goals, and then find they work with others and find they have the ability to help those individuals, then it’s something to consider studying up on.

This May, Lee, who was a semi-professional body builder and has done martial arts and cage fighting professionally, will prove the concept of the mind and body as powerful tools as he embarks in Ontario’s first ever bare knuckle traditional martial arts challenge, hosted in Windsor. Lee will use his hypnosis and visualization skills he’s gained in his field to conquer this challenge.

“You can reset your mind and body to wherever you want to reset it to,” Lee said.

This challenge is also a way for Lee to show that this sport is another way people can help deal with mental health.

Lee is also an advocate for mental health awareness, which is another aspect he’s trying to get across in his shows as well. But he still makes sure his audience has a good time.

“It’s a message we relay but we don’t want that to affect the optics of the show, this is really a night to get out, have fun, laugh, have a great time and forget for 90 minutes of all the stuff happening in the world and immerse yourself into my twisted world,” Lee said.