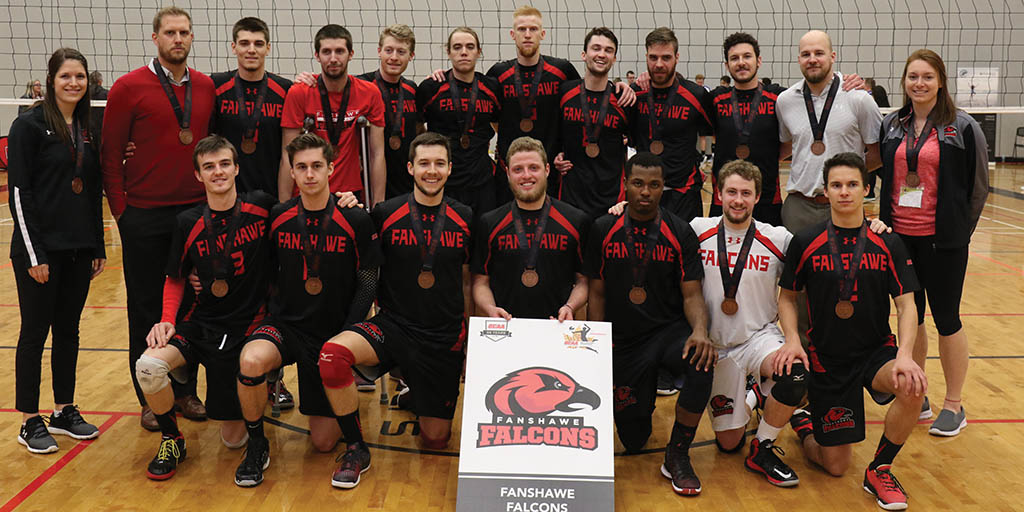 Though Fanshawe's men's volleyball team took home a bronze from the OCAA Provincial Championships, they are fighting their hardest to get gold at the CCAA National Championships.


This season has been a spectacular one for Fanshawe’s men’s volleyball team with them finishing the season first in the Canadian Collegiate Athletic Association (CCAA).

They finished the regular season with an 18-1 record.

On the weekend of Feb. 24, the Falcons competed in the Ontario Colleges Athletic Association (OCAA) Provincial Championships finishing with a bronze medal.

“The semi-finals was a big glitch for us, Durham played incredibly well and we weren’t prepared for them to play the level they did and sustain it as long as they did. But the guys recovered really well and were able to come out strong and win the bronze medal,” said Patrick Johnston, head coach of the team.

The tournament started with the Falcons taking on the George Brown Huskies in the opening quarterfinal game where they beat them in three straight sets with scores of 25-13, 25-18 and 25-20.

In the semis, the team took on the Durham Lords losing all three sets.

This brought the team to the bronze medal game against Georgian where the Falcons came out strong, winning all three sets with the scores of 25-20, 25-11 and 25- 23.

“I think they realized that as poor as the match against Durham was, there was nothing they could do about it afterwards and they needed both for their own confidence and just in order to move forward and start nationals, the best way to do that was to put it past them and execute well against the Georgian Grizzlies and feel a bit better over the next 10 days of prep,” Johnston said.

With a free pass to the CCAA National Championships since they are the home team, the Falcons are practicing hard hoping to bring their best game forward.

“[The loss] was a good thing [because] it exposed some gaps in our game that we need to address over the next 10 days and be ready for the quarter finals Thursday night,” Johnston said.

The championships take place March 9 until March 11 and passes can be purchased for $30 at the front gate of any home game, at the Fanshawe Athletics office or at Fanshawe’s Biz Booth.

For $100, fans can have the platinum pack which includes premium reserved seating along the baseline, special pass holder’s entrance and access to the new Falcons Suite, which will have free pizza and a cash bar during Falcons evening games.

“I think it’s going to be a rowdy environment, tickets are selling really well already and the volleyball community is going to be out in full force and I expect a big party at Thursday’s [the 9th] 8 p.m. home match,” Johnston said. “We’re hosting Red Deer in the quarterfinals who have won a handful of national titles in recent memory, so it will be a big match between two teams that have been back and forth as number one in the country for much of the year.”