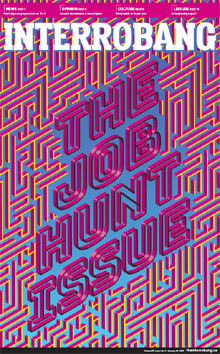 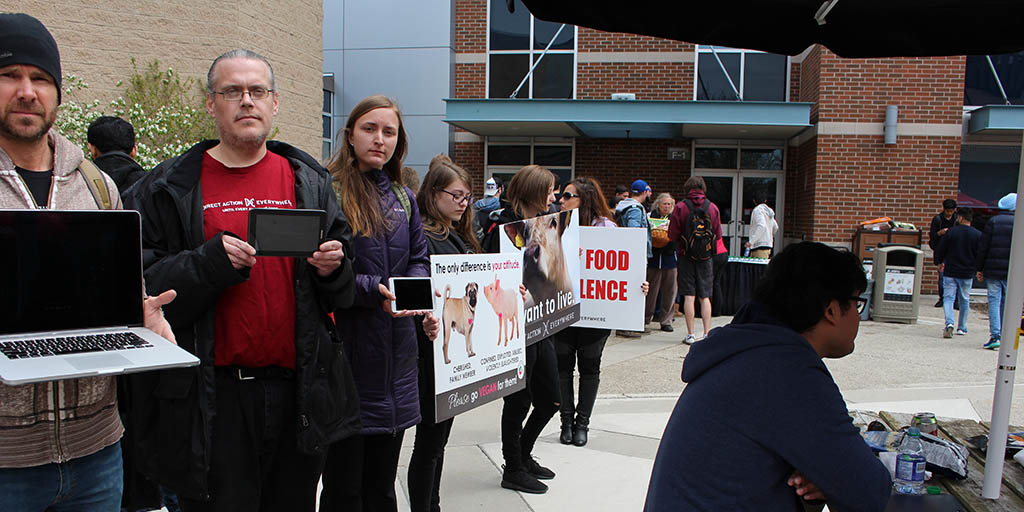 
The Fanshawe Student Union (FSU) put on their annual free summer barbecue in the SUB courtyard on May 11.

According to FSU food and beverage manager, Ryan McTavish, roughly “800 people were served”, at the event.

Students were not only attracted by the free food, but also a petting zoo that showcased alpacas, bunnies, and goats. Wild geese and baby ducklings also made an impromptu appearance in the courtyard.

People's attention shifted to protesters brandishing signs that said, “It's not food, it's violence”, or “I want to live”, with a picture of a cow. Another had a pig and a dog juxtaposed, while laptops showed the documentary film Earthlings. The protesters also catalogued the event on camera.

The protest was led by Fanshawe student Ilana Walker, a member of the group Direct Action Everywhere (DxE) London chapter.

According to Walker, DxE is involved in “doing different disruptions in the community like this, educational demonstrations”.

Walker is also a part of a group called The Save Movement.

“The group [Save Movement] has a presence at the slaughter houses and documents a lot of footage of animals before they go to slaughter. It's just to bring awareness to these places, that it's happening and it doesn't need to happen,” Walker said.

While identify the hypocrisy in having a barbecue right next to a petting zoo, Walker also commended the FSU for providing the option of veggie dogs. 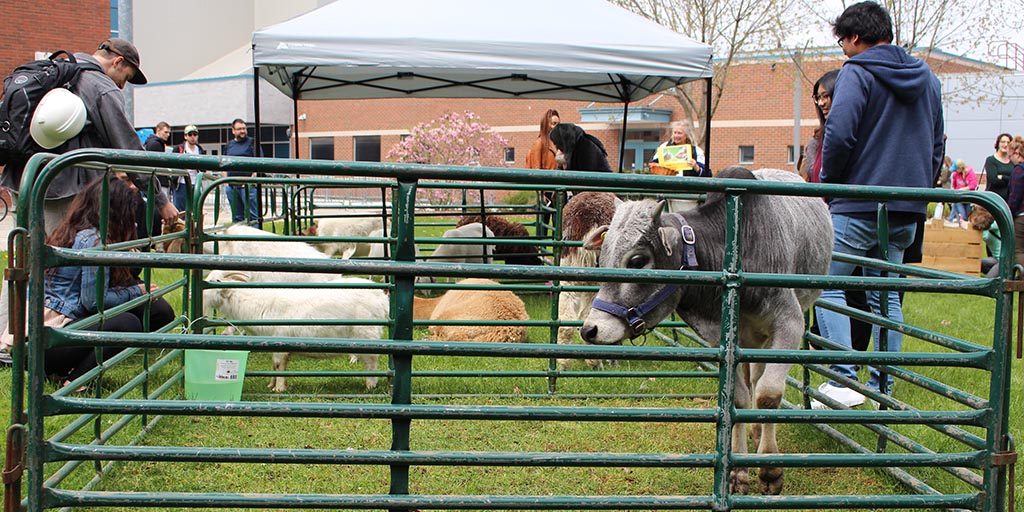 Fanshawe student Juan Ramirez shared his thoughts about the protest.

“I get where they're coming from. [An animal] is a life right? [The protesters] are not doing anything aggressive they're just showing their viewpoints. I think it's okay,” Ramirez said.

Ramirez also expressed the feeling that vegan efforts may be futile.

“Let's say we all stopped eating pork or meat and stopped buying meat products that would not stop the production of meat, it would just be shipped elsewhere,” Ramirez said.

Ramirez did however conclude the protest worked in doing what he described as “guilt tripping”. “We're all just here to have a good time; we're not trying to think about all the lives that are taken, but I guess that's the whole point of the protest,” Ramirez said.

To his point, an unnamed student accompanying Juan said, “I honestly feel bad after eating the hotdog, I'm trying not to throw up. I don't eat pork or stuff like that… I feel super bad now”. 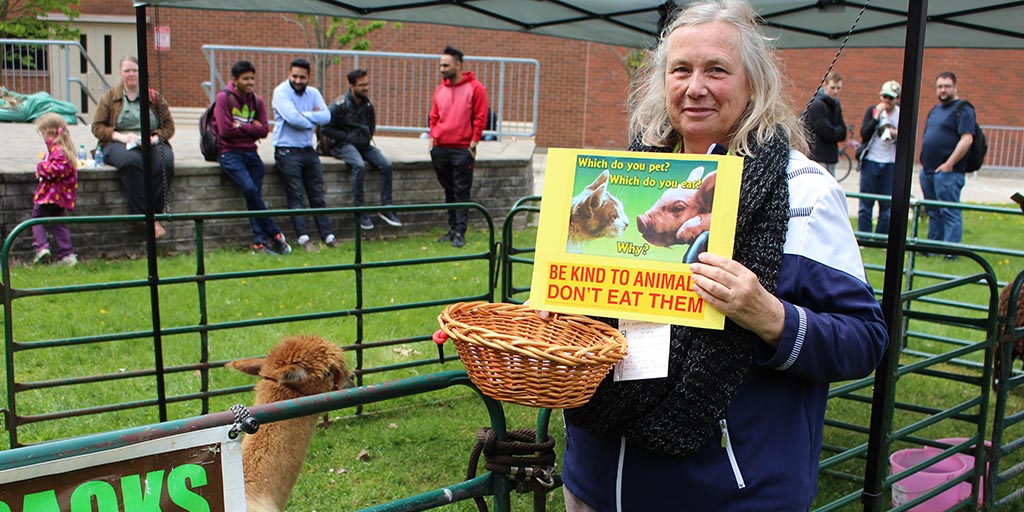 Although the protesters were peaceful and most were silent, there were a few who engaged in debates.

One of the protesters, a Fanshawe Alumna, who wishes to be anonymous, debated with a farmer and current Fanshawe student, who also asked to not be identified.

The protester explained to the farmer, “In this day and age it is no longer necessary [to eat meat]. People say animals aren't tortured, but they are.”

The farmer countered and said, “You're saying it's not necessary, but you're not getting the nutrients you need to live.”

Strong feelings boiled over in another confrontation involving another student from a farm that ended with them being removed from the event by staff and security.

“We were talking about how it's not fair that the animals are exploited without considering their well-being,” a DxE protester, who also wishes to remain anonymous, said.

The anonymous individual along with another DxE protester who can only be identified as Jaime described how the individual got upset and raised their voice before finally becoming physical, allegedly slamming the protesters' laptop closed and trying to knock equipment out of their hands.

“He was deflecting telling us we should focus on more humanitarian causes, talking about the devices that we're holding and sweat shops,” Jaime said.

“We care about child labour as much as anyone else, but animal agriculture is one of those issues that cannot continue without cruelty…We're here to talk about animal rights,” the anonymous protester said.

The protesters said the irate individual was not arrested and all they wanted was an apology.