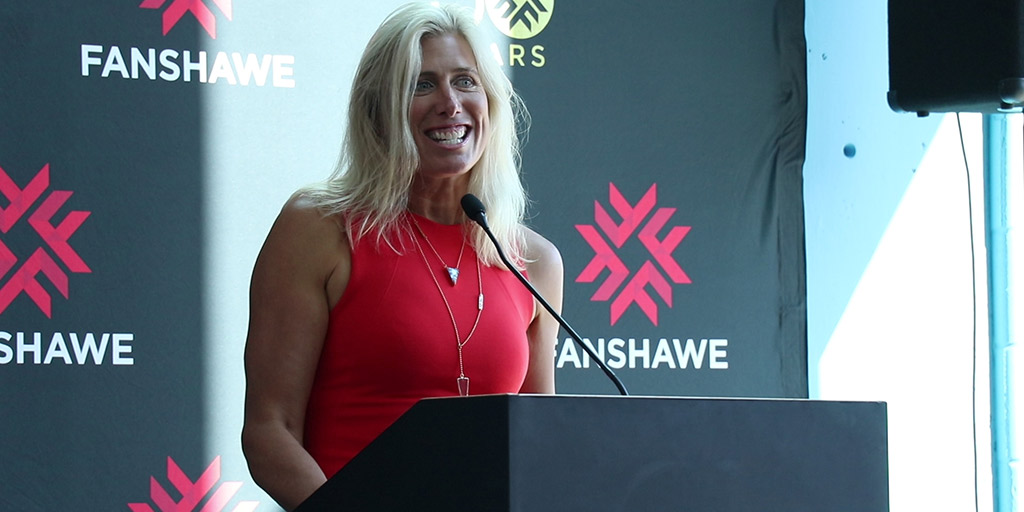 Silken Laumann spoke at the College's REDTALKS event and gave a speech at the grand opening of the Student Wellness Centre. Laumann is an advocate for not only great physical strength, but also mental strength.


On Sept. 21, REDTALKS special guest Silken Laumann spoke to members of the Fanshawe community about her life as a professional athlete and the obstacles she has overcome both physically and mentally during and following her athletic career.

Laumann is a renowned Olympic rower and best-selling author who travels across the country to share her personal story of optimism and perseverance with the public. Silken also spoke to the audience at Fanshawe about struggling with her mental health, a topic she wants to become more public and widespread.

“I really wanted to contribute to the dialogue going on in Canada about mental health. We want to normalize conversation around it,” Laumann said. “Mental health is part of [your overall] health. It's physical, mental and spiritual. The sooner we break down those obstacles that prevent people from getting help because of the stigma attached to it, the better people will get and be able to live out their full potential.”

Following the REDTALKS event, Laumann gave a speech at the grand opening of the Student Wellness Centre. She stated that the Centre reflects how our ideas of what constitutes “wellness” is changing in a positive way.

“This is not just about being fit (which I'm passionate about), but it's also about being healthy mentally, physically and spiritually,” Laumann said.

Laumann explained that when she was younger, she wanted to participate the Olympic Games. She originally wanted to pursue gymnastics but eventually fell in love with rowing after her sister introduced her to the sport. Laumann said that lifting the oars out of the water felt like flying on water to her.

While training for the 1992 Summer Olympic Games, Laumann was one of the best rowers in the world and was looking forward to her shot at the gold medal. “I was incredibly focused [on winning the gold medal]. To be at that level of competition, you have to train three times a day and lift weights on top of that,” Laumann explained. However, just ten weeks before the Olympics, Laumann suffered from a devastating accident that left her with a shattered ankle and massive muscle damage. The doctors told her that she would never row competitively again. Laumann explained that she could not imagine herself not competing at the Olympics.

Laumann ended up competing in the 1992 Olympic Games after five operations and numerous hours of rehabilitation. She took home the bronze medal for women's rowing. In addition, Laumann had the honour of carrying the Canadian flag for team Canada during the closing ceremony.

According to Laumann's official website, she retired from rowing in 1999 and went on to become a life coach and inspirational speaker. She lives in Victoria, B.C. with her partner and their four children and contributes to publications such as Today's Parent and Chatelaine. In addition, Laumann dedicates her time to improving the lives of children. According to her website, Laumann is the author of Child's Play: Rediscovering the Joy of Play in Our Families and Communities, a guide on how to get kids healthy and active.