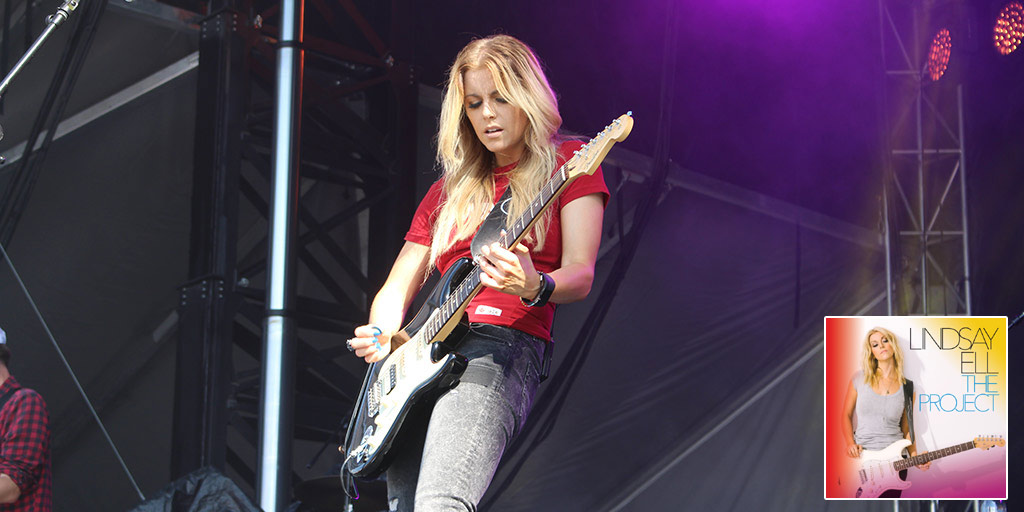 Canadian born and raised, Nashville based musician Lindsay Ell, recently released her official debut full-length album The Project. In over a short amount of time, the album has already gone number one on the country charts and has a number of catchy tunes that showcase Ell's vocal and musical ability, not to mention her killer guitar skills.


Canadian born and raised, Nashville based singer/songwriter Lindsay Ell recently released her debut full-length studio album and has been riding with its success ever since.

Though this is Ell's official full-length debut, she previously released music and a number of singles over the last few years, including “Trippin' On Us”, “Shut Me Up”, “All Alright”, and “By The Way”. The latter Ell performed in London during the 2016 Canadian Country Music Association (CCMA) Awards gala. She also released an EP this past March titled Worth The Wait,

It was also at last year's CCMA awards' John Deer green carpet event where the Interrobang spoke with singer/songwriter Kristian Bush (originally from the band Sugarland) who was able to finally publicly announce he would be producing the Worth The Wait EP and The Project. Bush was enthusiastic about working with Ell, and mentioned he enjoys Canadians and the music they create.

Besides last year's awards show, Ell was in town this past July for the Trackside Music Festival, where even though she lost most of her voice and was unable to sing for previous shows, she pulled through for London. Ell was backed up by her band and her amazing guitar skills.

The Project itself, is a work of art, something that is original, fun, creative and completely different from what is out on the country radio charts nowadays.

The fact that Ell can shred her guitar like no other also gives her an extra edge and is something she's been able to showcase not only with her own performances, but with the likes of top notch guitar heroes including Keith Urban and Brad Paisley. Ell recently wrapped up touring with Paisley across North America on his Weekend Warrior World Tour, while also playing a number of other festivals and gigs in between. Ell is set to embark on more American dates on her own as well as travel to Europe in the next few weeks. Even The Project has only been out for a little bit, she's in high demand for shows and is booked like a major superstar, not to say she hasn't been around the music industry for very long, because that is not the case.

Ell has been gaining momentum and earning her stripes for a number of years now since relocating to Nashville and even before then, she's been working for this moment since discovering her passion for the art of guitar and music at a young age.

Again, what helps set Ell a part from other artists, whether male or female in the country music scene is her ability to write, sing and perform great songs, but also connects with fans on an instrumental level with her guitar playing. The riffs, chords, slide and overall playing resonates with fans and also proves that she has the talent and plans to be here for the long haul.

One can compare Ell to the legendary Bonnie Raitt, who is by far considered a slide guitar queen, however Ell has her own unique way of shredding the guitar and brings a fresh vibe to each and every show. Even with just Ell and a pedal board, it becomes a party on stage.

This energy with her guitar(s) is not lost on The Project, in fact Ell created a “project” for the album by painting a number of guitars and featuring one in each of the music videos she made for every song on the album. Certain guitars were painted specific colours to match either the mood or symbolism of these songs. For example one guitar was painted mint green, for her song “Mint (about a steady relationship in “mint condition”) while “Just Another Girl” (about a rocky relationship where the girl doesn't want to have a “broken heart”), features a painted blue guitar with hints of yellow and a red heart.

The Project as a whole is a series of unique songs, from fast paced to slowed down tunes that showcase Ell's many musical talents. Some of the songs from the Worth The Wait EP are featured on The Project, including “Worth The Wait” itself. Topics on The Project range from love, loss and live, with Ell of course playing guitar with each new song that plays on the record.

Ell's vocals are strong and soulful. Even though she's representing country music, her songs have a different sound than most in the genre, almost blending country, pop, blues and R&B together. She's covered songs from different genres before with Stevie Wonder being one of them, hence the R&B feel to her sound. The song “Champagne” and “Castle” both have an R&B vibe to them.

Since its release date, The Project has gone number one on the country charts and her first single off the album “Waiting On You” has had much success as well.

“Like the dry ground/Waiting for the rain to fall down/I'm a July sky, you're a bottle rocket/I'm waiting on you/Like a sailboat wishing for the wind to blow/Like a fast car looking for the green to go/I'm right here, baby/Don't keep me waiting on you” the chorus goes.

The album has many catchy tunes such as “Criminal” that will have you tapping your toes, eager to hear more.

With Ell's girl power positivity, strive for giving it her all and booked schedule, both for shows and media gigs, Ell has come along way since her start in the industry. She's making it clear that The Project is not only her life and soul, but a product of all her hard work and determination of her musical journey thus far. Ell makes it clear she's not going to wait around on the sidelines hoping to one day achieve greatness and at the rate she's going, she's already gaining recognition, fans and well deserved success