Holiday cuisine around the world 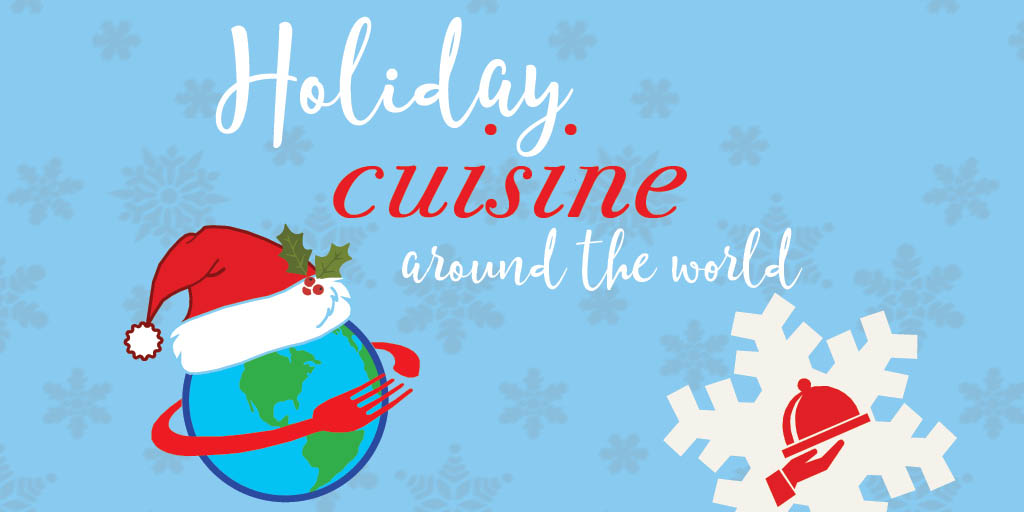 
No matter what country you are in, the holidays generally involve a lot of food. Each country has different holiday traditions and feature unique cuisine to celebrate. Here are some, but not all of the different traditional foods around the world that people eat to celebrate the holidays.

The majority of people celebrating Christmas in Canada and the United States will have a turkey dinner at some point throughout the holidays. Plates are filled with turkey, stuffing, mashed potatoes, gravy, cranberry sauce and vegetables to guarantee you will not leave hungry. Eggnog is a popular Christmas beverage in North America made from beaten eggs, cream and spices with the occasional shot of rum, brandy or bourbon added. Many people, particularly in Quebec, will serve a french meat pie called tourtiere. In addition to these traditional foods the holidays are a great time for sugar cookies, fruit cakes and gingerbread houses.

Tamales are a popular South American food item eaten all year round with a larger prevalence at Christmas. Tamales are filled with meat or something sweet and wrapped in a cornmeal dough then steamed or baked in corn husks. Popular holiday desserts you can find in South America include spiced hot chocolate and bunuelos. Bunuelos are Mexican fritters that are fried and often coated in sugar and dipped in honey.

A popular West African holiday dish is chicken stew or curried goat stew. The meats are slow cooked with a variety of spices so the flavour goes right into the bone. Most holiday meals revolve around some sort of meat whether that be chicken, goat or fish and served with rice on the side. Popular African rice dishes served over the holidays include an oven baked jollof rice and Nigerian fried rice. For dessert you can often find malva pudding which is a traditional South African recipe or rum cake with rum butter sauce.

Many countries in Asia have different holiday traditions when it comes to food. A popular dish you can find during Hanukkah in Israel for example are potato pancakes called latkes often served with sweet sauces. A traditional dish in China is tangyuan which are rice flour balls stuffed with either sweet or savoury fillings and served in a soupy broth. In the Philippines you can find bibingka, a traditional breakfast pastry cooked in a pot lined with banana leaves and topped with coconut shavings and local white cheese or an egg. A popular holiday dish in Vietnam is a sticky rice cake layered with mung bean, pork and other ingredients then wrapped in bamboo leaves and steamed. On Boxing Day in Singapore, people use their Christmas leftovers such as sausages, chicken and cabbage to make curry devil which is cooked it in a spicy Singaporean gravy.

Christmas in Australia and New Zealand is in the middle of the summer so holiday meals are often cold foods or barbecued meats. A typical holiday meal in these two countries includes cold ham and turkey, seafood, salads and Christmas cake or pudding. A popular holiday dessert in Australia and New Zealand is pavlova which is a sweet and crispy meringue garnished with fresh fruits such as strawberries, kiwis and passion fruit.

Europe is very diverse when it comes to different countries and their holiday traditions. A few popular dishes around Europe include melomakarona in Greece which is a cookie soaked in honey and topped with walnuts as well as a sweet and spongy yeast cake called babka in Poland. Other popular European holiday desserts include buche de noel in France, which means branch of Christmas, which is a rice cake rolled into a log. Although fruit cake is popular in several countries during the holidays, the first fruit cake is called panettone and comes from Italy. Panettone is filled with raisins and candied fruit and topped with pearl sugar. Main dishes across Europe range from stuffed goose in Germany to dried and salted cod (bacalhau) in Portugal to mince pie in England.