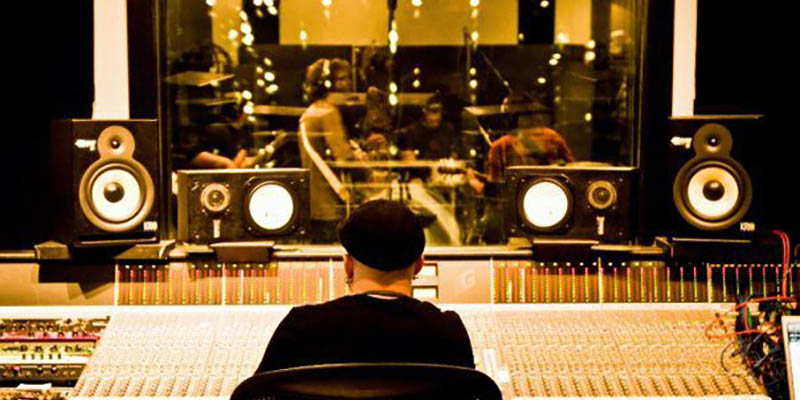 CREDIT: KAPLANKRUNCH.COM
Three-time JUNO nominated and Fanshawe Music Industry Arts (MIA) graduate, Ben Kaplan, met with Interrobang and shared some tips and stories of how he got to where he is today.

Fanshawe Music Industry Arts (MIA) alumnus, Ben Kaplan, is up for his third Juno nomination in the recording engineer of the year category, for work on Mother, Mother’s single “Get Up” and “It’s Alright” on their Dance and Cry album.

Kaplan chatted with Interrobang to share what brought him to this point in his career and expressed his appreciation for the recognition he’s received.

“It’s is always lovely and always a surprise and it always comes in at like eight in the morning out here while I’m still trying to get my kids out the door,” Kaplan said, telling how he had no idea of his nomination until friends texted him congratulations.

Kaplan, who grew up in London, Ont., said he is looking forward to returning to his hometown for the ceremonies, serving as a great reason for a family vacation to visit his parents.

“I think they’re the most excited out of anybody. Not because of the Junos, but because they get to see the grandchildren,” he laughed.

One doesn’t get to Kaplan’s level of recognition overnight. It takes years of passionate dedication, something Kaplan has demonstrated ever since he was a student at Fanshawe.

Remembering his time in MIA, Kaplan recalled that he was quite the night owl, making the most he could of the schools facilities whenever possible.

“If you wanted to actually do any work you had to go to school, you couldn’t just pull your laptop up at home...I’d go in all night, just until my class in the morning and I ended up doing a whole record that way,” Kaplan said. “There was no spare time because that was my time. That’s all I did was work on music.”

Surprisingly, engineering was not Kaplan’s primary reason for attending Fanshawe. “It was more of a back up plan because I had the band thing going...and like most musicians that take MIA, it’s to enhance their music career in one way or another,” Kaplan said, telling how he initially expected a career as a guitarist.

As time went on however, Kaplan eventually realized that engineering would prove to be far more than a side hustle.

His professors also realized this, recommending him to work with legendary producer/engineer Garth Richardson on the first KiTTiE album, which was recorded at London’s EMAC Studios shortly after Kaplan graduated.

“That was a pretty good glimpse into production,” Kaplan said. “Then he invited me to Vancouver to work on a record at the beginning of 2000 and then I went out to do that one record and then I just never left.”

This relationship, paired with a passion to learn lots and work hard laid the groundwork for a successful career.

“I was lucky enough to work with Bob Ezrin and Jack Richardson and Andy Wallace and Mike Fraiser and all these massive, massive guys,” he said. “So I was really, really lucky... to be able to learn kind of the old school way.”

Kaplan recognized however, that students nowadays may have to take a very different route than his.

“The industry, what it was 20 years ago is quite a bit different than what’s going on today. So, today is far more of an entrepreneurial spirit,” he said.

Kaplan acknowledged the pros and cons of this environment.

“There is a wealth of information on the internet that did not exist when I was coming up...I mean, you could learn anything by a quick Google. But there’s something to be said about the actual hands on experience. Which is really really important,” Kaplan said. “The thing that a lot of up and comers aren’t getting today...is they don’t have that experience of working with other engineers, other producers, other artists in a studio setting.”

In his early days, Kaplan honed these talents by producing music for friends, often for little or no pay and would encourages current students to do the same.

“Experience is paramount whether you’re getting paid or not... If you don’t do that then you’re just playing the lottery and the odds are not very good,” Kaplan said.

Once you have the experience under your belt, beating the odds still takes a lot of dedicated work and giving it your all.

“It’s really not a part time thing... Because whatever record you’re working on, you end up working overtime, no matter what,” Kaplan said. “You have to really pour yourself into every note of every recording and every record that you do. Because if you don’t somebody else will.”

Practising what he preaches, Kaplan has not allowed three Juno nominations serve as any excuse to take a break. He currently continues to work on a multitude of notable projects including a recent release with Corb Lund and beginning a new Five Alarm Funk record.

Those interested in finding out more about Kaplan and his work can go to KaplanKrunch.com.
Ben Kaplan Fanshawe alumni Junos Music Music Industry Arts