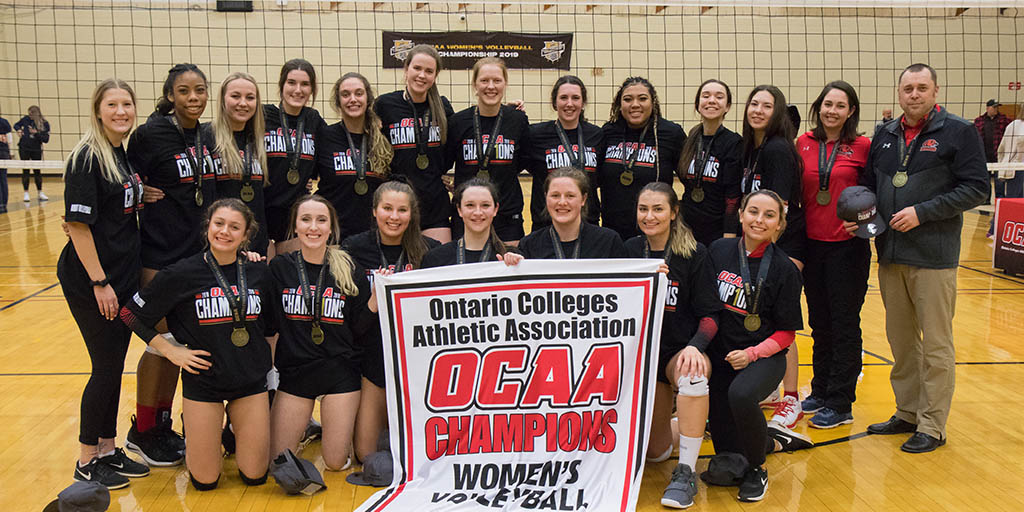 The feat is the first OCAA Championships won by the team since 1972.

The Falcons’ Championships win was preceded by an undefeated regular season of 18-0, the first in history for the team.

“We didn’t drop a set all weekend,” Pellow said.

The win puts an end to the streak held by Humber College for over a decade.

“This is the first time Humber hasn’t won the championship in 12 years,” Pellow said.

Meghan Morelli and Danielle Grasman of the Falcons were among those named as Championship All-Stars for the weekend. Janelle Albert, recently named OCAA Player of the year, was named Championship MVP, in addition to player of the match in the championship game.

The team has undoubtedly had a successful year, but much of their success can be attributed to how they work together and carry themselves both on and off the court.

“We spend a lot of time working on culture and team cohesion, so that’s a big piece to our success too,” Pellow said. “Listening to other people talk about us… the officials were very complimentary about the cohesion and culture of our team, the girls are all very polite, they thank everybody, there’s never any kind of disrespect coming from our program…those were all really cool things for me to hear.”

For Pellow, the highlight of the whole season was seeing the team get to enjoy their success and celebrate all they had worked for.

“At the end of the gold medal match, I went and sat down. I just kind of took it all in and watched the girls celebrate…seeing them enjoy all the things they have accomplished this year,” Pellow said. “Seeing the fruits of their labour, the effort put in by the team, and us as coaches… that’s the highlight.”

Aside from breaking the 47-year women’s OCAA championship drought, history was made for the Falcons volleyball program this season.

In addition to the men’s Championships win on Feb. 23, the women’s win marks the first time in Fanshawe history that both the Men’s and women’s volleyball teams have won OCAA Championships in the same year.