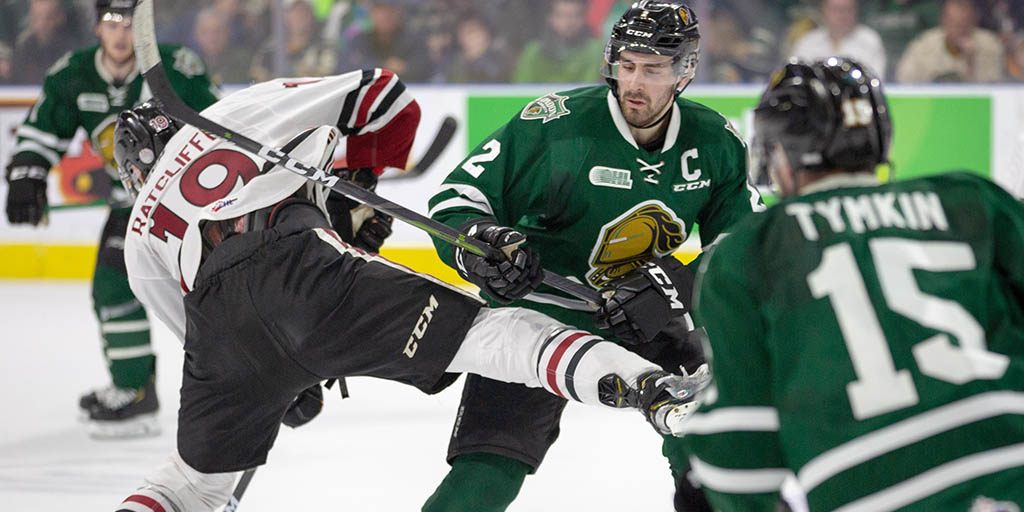 The London Knights will have a chance for a comeback when they return next season.

Despite a first-place finish atop the Western Conference, not to mention beginning the playoffs on a 7-0 start, the London Knights season ended on April 16.

How did we get here?

The team had built a decisive 3-0 lead over the Guelph Storm in round two of the OHL playoffs, but in an unpredictable turn of events, lost the next four games to the rival Storm, ultimately bowing out of the playoffs earlier than many expected.

When we last left the squad, they were coming off a 7-0 win in game two and were about to take a 3-0 lead on the back of a 7-4 win in game three. Though the Knights managed to score seven goals in back to back contests, the prudent observer was beginning to see the cracks in the armor, as evidenced by the Storm’s four goal outburst.

In game four, London badly outshot Guelph (42-31), but unfortunately luck was not on their side, and the Storm were able to sneak out a 4-3 win on the back of stellar goaltending from Anthony Popovich. More often than not, 42 shots get the win, simply put the Knights ran into a Popovich sized wall that night.

Games five and six of the series would follow similar scripts, both games would be neck and neck, with even shooting throughout both games, resulting in two goal losses for the Knights (3-1 and 5-3 respectively). It bears mentioning that both contests were effectively one goal games (when you take away late empty net goals) and were de facto coin flip games that could have gone either way.

In the decisive game seven, despite London scoring three unanswered goals to take a 3-1 by the midway point of the second, the storm was able to draw even and pull away with four consecutive tallies of their own (as well as an empty netter). When it was all said and done, the Storm managed to leave game seven with an emphatic 6-3 victory, putting an exclamation point on one of the greatest comebacks in OHL history.

This is the part of the story where I give the Storm all the credit in the world. This team simply refused to be put down.

Imagine how easy it would have been to lay down and die after allowing seven goals in back to back games and falling into a 0-3 hole. They didn’t. Imagine how hard it must have been to trade for, and successfully integrate significant players like; Mackenzie Entwistle, Fedor Gordeev, Sean Durzi, Markus Phillips, and Nick Suzuki. For those keeping track, that’s two thirds of their top line and three out of their top four defenseman, all arriving in season at one point or another. The Storm made a massive bet on themselves and the players they thought could get them over the hump, and at least for the moment, it’s paying dividends. All you can do is tip your cap to that entire organization.

Now, back to the Knights.

Understandably, there is some disappointment in the way this season ended. Of course, it will take some time for all parties involved to put this in the past and move forward. That being said, inevitably one season leads to the next, and inevitably, the London Knights will be back, pushing the envelope of success as they always do. Maybe sooner than you think, when you consider that more than half of this year’s active roster, the roster which paced the Western Conference in 2018-19, are eligible to return next season.

“I just told them about my experience, I was 18 we lost game seven in here against Guelph and the next year we came back and won the Memorial Cup,” Hunter said. “We had a little fire.”

Coincidentally, that 2005 team went on to be named CHL Team of the Century earlier this very season.

Losing is never easy and losing like London did in this series is certainly no exception. However, often times it’s from moments like Tuesday that greatness is forged.