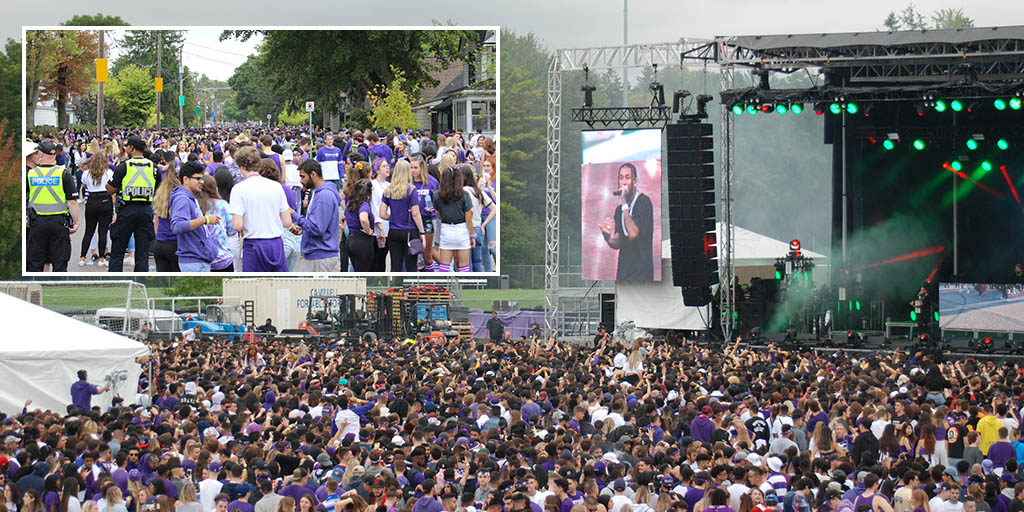 
The City of London’s Unsanctioned Street Parties Task Force have acknowledged that their work will not end with Fake Homecoming (FOCO) 2019.

The Task Force held a press conference on Sept. 30 to give an overview of gathering on Broughdale Avenue and surrounding areas on Sept. 28, including the number of injuries and charges laid.

During the conference, London Police Service Chief Steve Williams said that there were around 25,000 attending FOCO at its peak. He said 14 people arrested for provincial offences and 62 tickets issued for offences including, but not limited to open liquor, public urination and underage drinking. No one was seriously injured.

He added that the policing cost regarding FOCO was $300,000, up from $200,000 last year, which includes planning costs before the event and operational costs on that day. Officers from the Hamilton Police Service and York Regional Police Service were assisting London Police, bringing a total of 150 officers on site.

“While overall the crowd seemed less volatile this year compared to last, there were still many intoxicated people on roofs, jumping between roofs, climbing trees, and participating in other dangerous behaviour,” Williams said.

He added that part of Richmond Street around the area was closed at noon and reopened about four and a half hours later because of the huge crowd navigating the area, forcing drivers to detour.

A Task Force backgrounder provided by the City of London said 2,070 provincial warnings were delivered and no federal charges were laid. The backgrounder also said the London Fire Department delivered two charges related to the Ontario Fire Code and 592 warnings surrounding the Fire Protection and Prevention Act were given out. Those warnings were tied to people on roofs and overcrowding.

Middlesex-London Paramedic Service Chief Neal Roberts said a total of 31 people, 22 at Broughdale and nine nearby the university, were sent to hospital.

London Mayor Ed Holder said the efforts of the Task Force, including but not limited to updating the city’s public nuisance bylaw and Western’s Code of Student Conduct and the University Students’ Council (USC) offering Purple Fest on Sept. 28, made a difference. However, there’s still work to be done.

“Ultimately, while there were several encouraging signs over the weekend, we must never be allowed to declare problem solved,” the mayor said. “We will be vigilant. We will be mindful and for that, we hope to carry on in a positive direction that this weekend established as we go forward into next year.”

The USC’s Purple Fest concert at TD Stadium featured A Boogie wit da Hoodie, Tyga, and bülow. A$AP Rocky was scheduled to headline the event, but he tweeted the night before that he couldn’t attend because he was still working on his Canadian visa after he was convicted of assault in Sweden in August 2019.

Prior to the Sept. 28 events, the USC reminded students of applicable municipal bylaws, the university’s Code of Student Conduct, and to stay safe and take care of themselves, their friends at Western, and the greater community, on their website.

USC president Bardia Jalayer said at the conference 13,000 people attended Purple Fest, with roughly 70 per cent of guests being Western students. He added that no one was arrested at Purple Fest and no ambulances were at the venue. The USC said in a press release that Med-On-Site and STAR Security staff were at the concert to reduce the burden for London’s emergency services.

“We’re thankful that it was successful and we’re looking forward to critically evaluating what went right, what went wrong this year, and looking to the future for what we can do better next year,” Jalayer said.

When asked about student feedback in a question and answer period, Jalayer said that any Western students looking to provide their say can send an email to president@nullwesternusc.ca or in a survey. He said so far, feedback has been positive.

Addressing FOCO after the conference

The Mayor of London and Western University representatives made statements about banners with vulgar messages displayed on front porches on Broughdale Avenue during FOCO. The banners and comments about them sparked local media attention, with CTV News London, CBC News, and the Western Gazette also picking up the story.

In a series of tweets on Oct. 1, Holder expressed concern over the signs.

“In addition to the size of the Broughdale crowd, what I find equally troubling were the messages of sexism, misogyny, and rape culture on full display hanging from the front patios of several houses in the Broughdale area,” he tweeted. “You’ll remember, London City Council became the first in all of Canada to make the safety of women and girls a strategic priority. We take that commitment seriously. We will not allow young women — be they students, faculty or otherwise — to be disrespected, and we will not allow London to be used as a door-mat, nor a poster-child for the ignorant messaging that was on display over the weekend.”

Alan Shepard, Western’s president and vice-chancellor, also said in an open letter regarding FOCO that he found the banners disturbing.

“It was very upsetting to see a couple of banners in the Broughdale neighbourhood that demonstrated a lack of respect for women,” he said. “Casual misogyny, passed off as a joke, is always corrosive.”

“While these messages may not have been rooted in malicious intent,” the USC said. “Messages like these create an environment where sexual assault is more likely to occur and where objectification of women is normalized.”

The USC added that last year’s Student Voices on Sexual Violence survey found 32 per cent of Western students said they faced a non-consensual sexual experience and 71 per cent said they experienced sexual harassment. The post also included on-campus and off-campus supports for those who experienced sexual violence or gender-based violence.

Holder said the Unsanctioned Street Parties Task Force is expected to meet within the next few weeks.