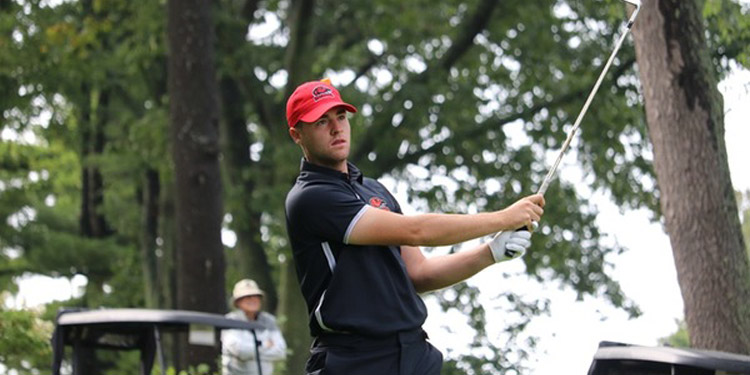 The tournament was hosted by St. Lawrence College at the Cataraqui Golf and Country Club in Kingston, Ontario from Sept. 30 to Oct. 2.

After a strong showing at the end of first-round action, Thomas Code recorded a three-stroke lead over the next closest competitor and finished five strokes under par for the course on the day. He was also named a Canadian Collegiate Athletic Association (CCAA) All-Canadian, and named to the OCAA All-Ontario Team.

“Starting a tournament with a low round is always beneficial. I knew that the conditions were going to be tough over the next few days so having a lead with 36 holes left was a good feeling,” Code told Interrobang. “The competition was strong, so I had to play smart. Playing with the lead is fun because you truly are in control of your destiny.”

The preparation and work that Code put into his craft in the months prior to his most recent competition was not taken for granted.

“Lots of personal growth went on during the summer and I was really pleased to put it all together at the OCAAs for a win,” said Code. “I knew I had to put in a lot of work and then have that work pay off in competition. I played a pretty busy schedule over the summer and was driven by a need to win.”

Code’s season saw growth, as he stated, not only from the countless hours of preparation he exercised during the off-season, but also within the season as well.

“I learned to stay patient and understand what that really means on the golf course. Every shot truly does matter but once you really understand what patience means you realize how to make every shot count. A round of golf is long and so much can go wrong over 18 holes that it is important to stay steady and make life easier on yourself,” he said. “I had a big turnaround at the Canadian after the first day which really made me wake up and play better, rather than just hitting the ball.”

After that first day at the Canadian Amateur, an open international tournament held at the beginning of August, Code saw his stroke count decrease considerably. His first-round score in the tournament saw him nine strokes over par for the course. His performance over the next three rounds saw him bridge that gap with a score of +1 over par for the course in round two and +3 over par in rounds three and four, highlighted by an eagle, which is two strokes under par, in his third round of play.

Hard work and patience paid off for Code, seeing him walk away with top honours of OCAA’s Men’s Individual Golf Champion.

“It felt great winning. It made all the practice and prep feel worth while. I love to compete and being able to win makes it taste that much sweeter,” said Code.

But there is no rest for the weary as Code is already preparing for the next and final step of his season with the CCAA Championship taking place Oct. 16 to 18 (this article was written Oct. 15).

“Up next is playing in the CCAA golf championship in Sorel Quebec. After that the competitive season is pretty much over until next year. Ending the season in this way is very motivating and I’m looking forward to a productive off season and getting right back into competition again in 2020,” said Code.

If this season is a testament of what Thomas Code is capable of, then the future looks very bright for this rising Falcon on the back nine.
Athletics Fanshawe Falcons Golf OCAA Thomas Code

1
Canadian student-athletes will no longer be tested for cannabis
2
No, you don't care about women's sports, you just don't like trans people
3
Fanshawe softball returns in style on opening weekend
4
What to expect from sports in 2021
5
Fanshawe College to host two 2022-23 OCAA Championships

How to say no to temptation and enablers