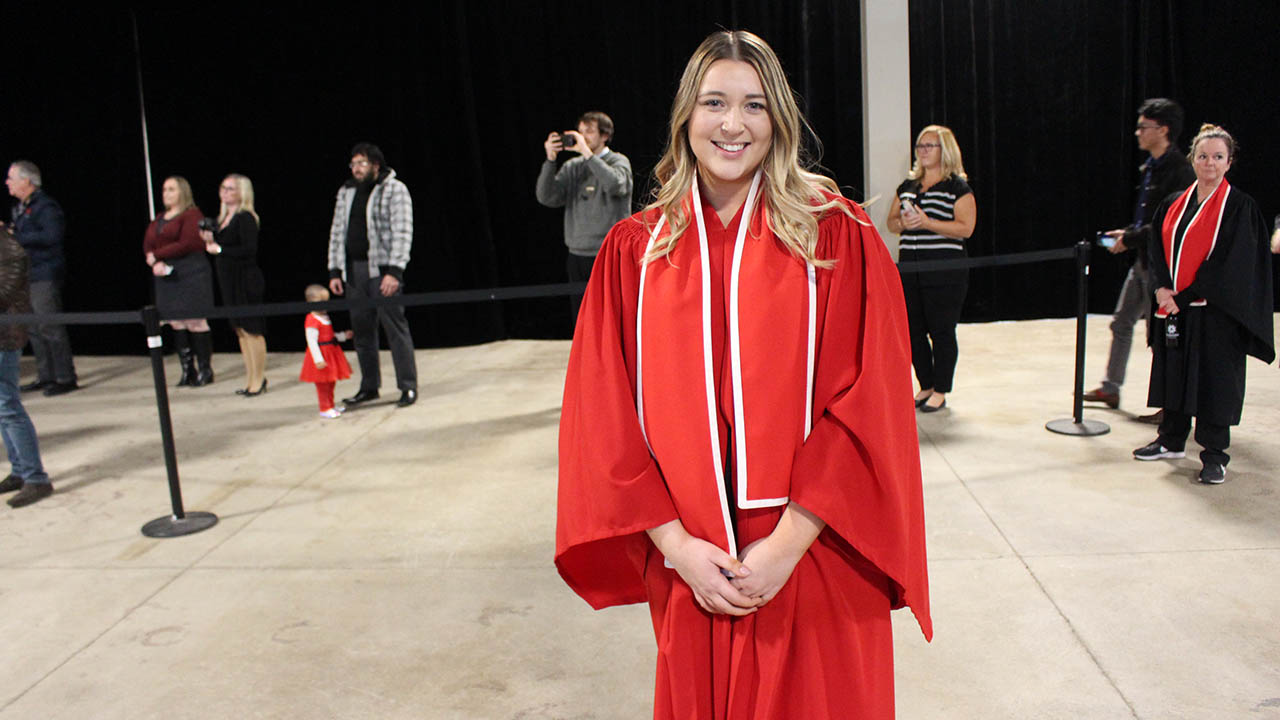 Haley Aldred, a recent child and youth care graduate and Fanshawe College’s 200,000th graduate, is grateful for the support she received from her peers and professors.


When recent graduate Haley Aldred reflected on her Fanshawe College experience, she frequently expressed gratitude as she spoke of the support she received from the College community.

Aldred is Fanshawe’s 200,000th graduate. The College celebrated the milestone and honoured her work ethic and spirit during the fall convocation ceremony on Nov. 6. Her father passed away during her second year and although she considered dropping out, Aldred finished the child and youth care program and received plenty of support during the rough patch.

“Sometimes when you go through things in life, you don’t think people really acknowledge what you’re going through [or] understand the struggles that you’re facing,” she said to Interrobang prior to the ceremony. “So when I found out that the reason I was being selected was because of me being able to accomplish finishing my diploma that was a really great feeling.”

Julie Cross, the coordinator of child and youth care program, immediately emailed Aldred upon hearing of her father’s passing. Cross introduced herself, offered to meet with her over coffee to talk, and pointed to Fanshawe’s Counselling and Accessibility Services. Aldred, who hadn’t considered using the services before, booked a consultation right away and attended a few more sessions.

Cross and the professors told her to not worry about her academics and to focus on taking time off to heal instead. When ready, she could return and have one-on-one meetings with her instructors or go over assignments and discuss possible academic accommodations.

“Overall, it was more so just the fact that they were like ‘Don’t worry about things right now, like school, put it on pause right now and worry about being with your family and then when you come back, we’ll be ready to work with you in any way that you need,’” she said.

Kim Hall, one of her instructors, was particularly helpful. Aldred said she would email her after class to check in on her if she noticed she had to leave class early because she was either feeling triggered or she needed some alone time and space.

Aldred’s friends also showed their support by catching her up on schoolwork and explaining concepts to her if she didn’t understand them at first.

For any students going through a similar experience, Aldred said to recognize when it’s time to step back and above all, to communicate with peers and professors.

“You’re going to have obstacles in life where they’re not always going to understand to the extent and I think that’s why the child and youth care program was so different,” she said. “I wasn’t expecting them to be as understanding as they were, but because we are in a field of mental health and we’re trying to decrease the stigma around it, I was really grateful to have them understand as much as they did.”

Fanshawe’s fall convocation congratulated 2,600 new members of the Fanshawe alumni family on Nov. 6 and 7 at the Western Fair Agriplex Building.