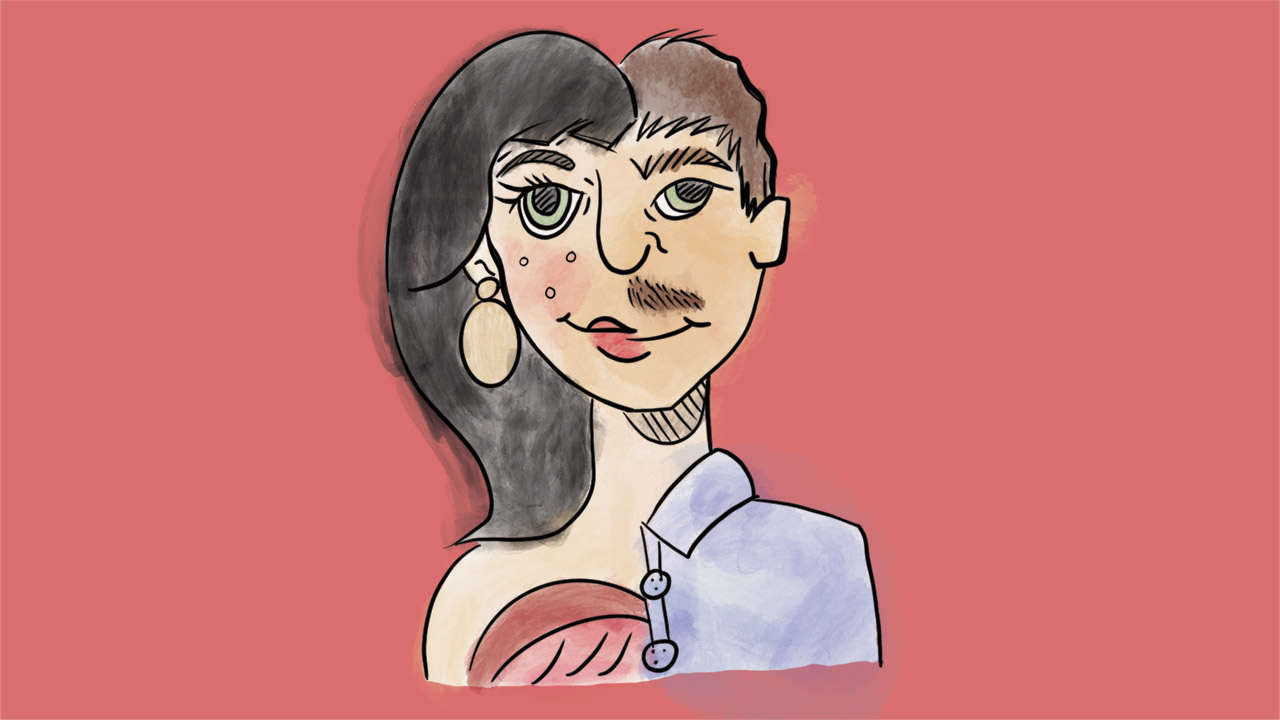 CREDIT: JESSICA WILSON
Sex and gender are not the same, yet they are often equated under the gender binary.

Gender is a complex and complicated subject. Many people are born one of two biological sexes, either male or female, with the idea being that those people will grow up to be men or women. This concept works for a lot of people, who are referred to as cisgender because they identify with the gender they were assigned at birth based on their sex organs.

This concept of the gender binary, where male and female are the only options, can be extremely limiting to people that find themselves identifying outside these constructs.

Biologically, gender isn’t black or white. If you’ve taken biology, you may have learned that most biological males are born XY and females are born XX. Though, this isn’t always the case; about one in 2000 individuals are born with only one sex identifier, or with many. Unless doing a DNA analysis for medical reasons, a person might never know about this difference.

Sometimes, either due to the genetic dice roll or other changes while in the womb, a person may be born intersex, meaning they are born with a reproductive or sexual anatomy that doesn’t fit the typical definitions of female or male. This used to be corrected by doctors and pills, but it’s becoming more common for parents of these children to wait until almost puberty before letting the child decide what gender they would like to be – if any.

Gender today is normally talked about in terms of masculine and feminine, but this has meant very different things throughout history and in various cultures.

The differentiation between gender and sex is key to understanding how gender identity affects people. While sex normally refers to the biological sex someone is born with, gender refers to how someone feels about themselves in terms of masculinity or femininity.

A person’s gender identity is what gender they feel they are in the core of their being. Gender expression is how they express gender, often with style choices or mannerism. Sexuality is about who they find sexually attractive, which can be anything from just one special person to no one at all. Society sometimes makes assumptions about someone’s gender identity based on their gender expression or sexuality, but these three things are not always related. Just because someone presents themselves in a dress and heels does not automatically mean they identify as female. After all, clothes are just objects that we have placed gendered meaning on as a society.

It might surprise some to learn men originally were the only ones to wear high heels in the 1600s; French noblemen would wear heels as a status symbol, showing they didn’t need to work.

Workers needed more practical footwear and couldn’t afford impractical shoes. Louis XIV had his own signature heels with red soles and heels that only the members of his court were allowed to wear. Status symbols like this still exist today, not unlike the expensive Louboutins that mimic the king’s style, according to an article by the BBC.

This started to change in the 1630s, when high-class women began adopting traditionally masculine behaviours like smoking pipes and wearing heels. Slowly the lower classes adopted these style trends and the elites responded by making their shoes with higher, more impractical heels according to an article in The Society Pages.

While I identify with being a cisgender female, meaning I feel aligned with sex I was born with, not everyone has that privilege. There are many gender identities that people can identify with: male, female, agender, gender neutral, non-binary, gender-fluid, transgender, genderqueer, two-spirit and many more.

This is why Facebook now gives people the ability to choose from a pre-populated list of gender identities as well as a custom gender. These changes can reflect how Facebook refers to a person through pronoun use on the site.

Pronoun use – he, she, they, zhe, etc. – is one of the ways you can show respect to someone who identifies outside the gender binary of male or female. Society is used to looking at someone and assuming what their pronouns are, but assuming pronouns can have a negative impact.

Misgendering a person can make someone feel very uncomfortable or in more extreme cases, put someone in a dangerous situation, such as if you accidentally ‘out’ someone as transgender. Most people will not be offended if you ask what pronoun they use. Many people use the term ‘preferred pronoun’, but some people’s pronouns are not preferred, but mandatory to their identity.

There have been arguments that say using ‘they’ as a singular pronoun is not grammatically correct, but in the English language we use it that way all the time. For example, if a chef makes something incorrectly at a restaurant, we say, “They forgot I didn’t want cheese”, where ‘they’ means the chef, one person.

In situations where gender is unknown, society often uses the term ‘they’ as a blanket pronoun. Using gender-neutral pronouns is considered to be safe if you are unsure of a person’s gender identity, but it’s always better to ask.

Asking someone about their pronouns can be uncomfortable, but it’s even more uncomfortable for that person to hear themselves constantly misgendered in conversation.

Reaffirming someone’s gender identity by asking about and using their pronouns is a way to create a safe space for someone. The most important thing to remember is not to question anyone on their pronoun use, because although you might be confused and don’t understand why someone might use those pronouns, their gender identity is valid whether or not you understand it.

If someone asks for their pronouns to be changed, respect that request. It can be difficult to change your language and you will make mistakes, but it’s important to show respect for people by using pronouns correctly.

While you may have never struggled with gender identity issues, it’s very likely that someone you love has. Remember, part of being human is choosing our own definitions and showing compassion is essential for those who are still figuring it out.
Cisgender Gender