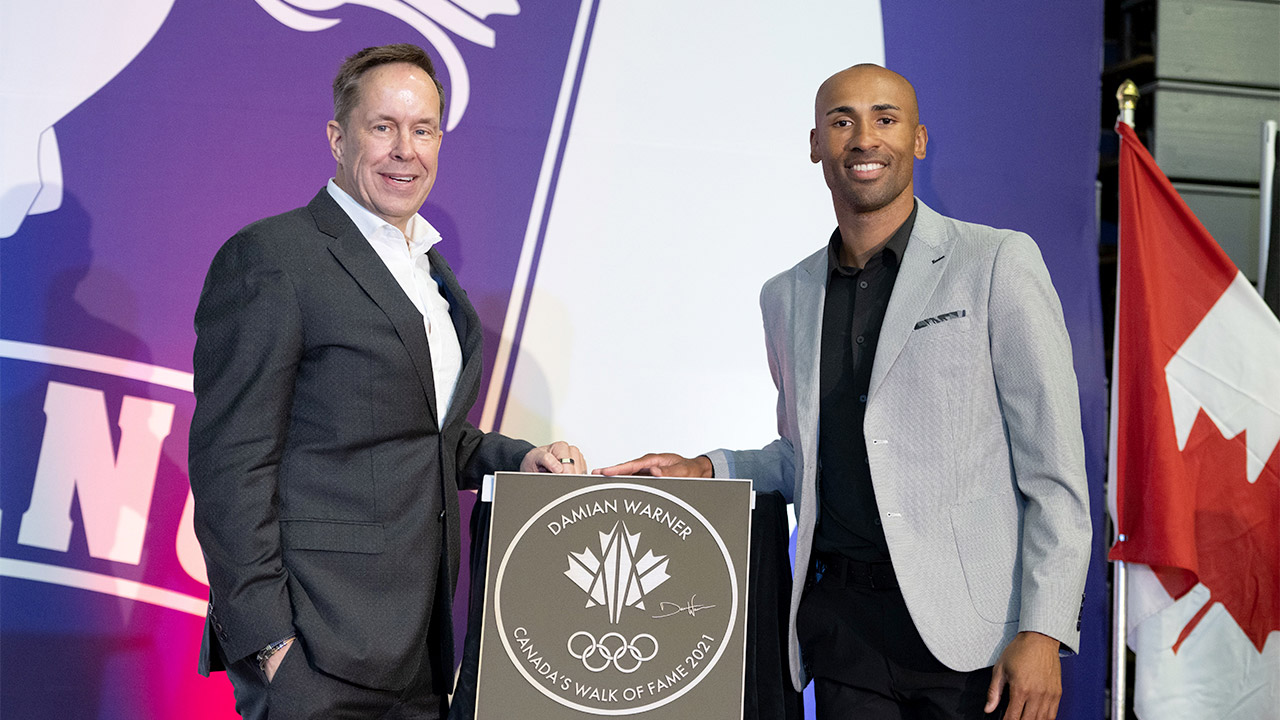 Olympian and Fanshawe alumnus Damian Warner has been honoured by his hometown following his induction into Canada’s Walk of Fame. The London, Ont. native won gold for decathlon in the 2020 Tokyo Olympics, the 2014 Commonwealth Games, and both the 2015 and 2019 Pan American games. On top of those achievements, Warner holds decathlon records in 100 metre and 110 metre hurdles, along with holding the fourth-highest decathlon score in history.

The ceremony on Nov. 14 was held at Western University’s Thompson Arena, Warner’s training facility, and was put on by Canada’s Walk of Fame as part of their Hometown Stars initiative. Attendees included the CEO of Canada’s Walk of Fame, Jeffery Latimer, and former Mayor of London, Ed Holder.

During his speech, Warner honoured Jeff Fischer, his former athletics and business manager, who told him about Canada’s Walk of Fame. Fischer died on Oct. 15 due to cancer.

“Jeff would always announce things but laugh, and he was laughing when he suggested that,” Warner said. “So, I thought he was joking around.”

In Dec. 2021, Warner was inducted into Canada’s Walk of Fame in a class that ranged from the scientists behind the discovery of insulin, to Keanu Reeves, to Bret “The Hitman” Hart. When asked how he felt about the other inductees of his year, Warner said he felt humbled.

“I feel like you can’t help but think that you don’t necessarily belong on that list. Those are guys that have impacted and even saved people’s lives. And I don’t know, I run around the track.”

The celebration included a replica of his Walk of Fame plaque that will be installed in a to-be-determined location in London. All Walk of Fame inductees receive $10,000 to donate to a charity of their choosing. Warner split the money between BGC London and KidSport Canada.

When asked about BGC London, Warner recounted spending Wednesday evenings at the club.

“I grew up in a poor neighbourhood in London, right? [BGC] would come around every Wednesday and pick us up,” Warner explained. “We’d get to play around and just have some fun. Forget about some of the world’s problems.”

Warner went on to thank Canada’s Walk of Fame and the City of London.

“The saying ‘it takes a village’ is completely accurate in my case, but in this case, it takes a city. And this is the city of London, Ont., where they’ve been behind me every step of the way,” Warner said. “I couldn’t be more appreciative.”

Warner went on to thank his team and his coaches, stating that the sacrifices they made to support young athletes like himself could not be understated.

“They take a lot of time away from your families to come to the track for athletes,” he said. “They’ve been there to help us out. They refuse to let us fail. They’re always in our corner. So thank you guys so much for everything that you do. None of this would be possible without you.”

The most important thank you was to his mother, Brenda, whom he places all of his success on.

“When I was young, my mom gave me the most important words that I’ve ever heard: ‘You can do anything you set your mind to.’”

That advice is something he echoed to any student athletes pursuing a goal of success.

“When I look back on my story, it shouldn’t have happened. I required a lot of people along the way to make it happen. I just think that if you have something that you want to do, you’re never too old or too young to set your mind on that and follow the path forward to get there.”
Damian Warner Fanshawe alumni Olympics