Amber Harwood Culture September 24, 2007
Forget The Good the Bad and the Ugly, the Wild West has never looked so good on the big screen as it does in 3:10 to Yuma.

Ben Wade (Russell Crowe) is a classic ruthless gang leader in the old west, who robs carriages full of money while killing anyone who gets in his way. Wade and his gang have robbed 22 carriages belonging to the railroad company, which is quickly spreading across the country. After what was supposed to be their last heist before moving to Mexico, the only place left where this cowboy is not WANTED, Wade gets captured and is going to be transported to a train to take him to Yuma prison. Five men take on the job of transporting this infamous criminal, including a man named McElroy (Peter Fonda), a bounty hunter hired by the railroad and Dan Evans. 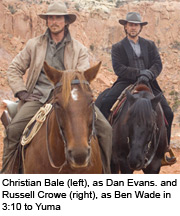 Evans (Christian Bale), is a one legged, war veteran turned rancher and family man with two young boys, one of which is very sick. Evans desperately needs money to pay-off debts, buy medicine and keep his ranch afloat, so he takes this dangerous job alongside the other men for $200 (a lot of money back then). Their story takes a turn for the worst when Wade's loyal gang follows the group, led by the exceptionally devoted, merciless Charlie Prince (Ben Foster). Evans and the others decide to take a short cut, to evade their followers, through Native American land and the railroad construction stations, which can only lead to more trouble. Look for the random cameo by Luke Wilson.

I loved this movie. A western, mixed with a great story, phenomenal actors and lots of action. I rank this movie right up there with Tombstone. Russell Crowe (Gladiator) did an amazing job as the cold-hearted gang leader, leaving you knowing he is bad to the bone, but hoping against all hope that he will prove you wrong. Christian Bale (Batman Begins) as usual delivered an excellent performance as the simple man who always has to do the right thing. Peter Fonda (Easy Rider) and Ben Foster (Alpha Dog) really added to the depth of the movie with their strong character roles. I recommend this movie to anyone who likes a good classic western about honour with lots of action.

Final Words: Saw it. Loved it. I am so glad that I live in the 21st century.