Allen Gaynor Culture September 24, 2007
After a one-week absence, the Cinema Connoisseur is back. The authorities seized my typewriter last week, but rest assured, they didn't find any evidence in it to pin the rap on me.

So to make up for last week, I will be reviewing two, count ‘em, two movies this week. Also, unlike most weeks, these films have been released in the past decade — hell, they were both released on DVD within the past two weeks.

There is no question that the fastest growing sport in the world right now is dog fighting. I think that is just sickening. I just can't stand the thought of those dogs taking away jobs from people. I'm sure that there are thousands of hobos and telemarketers who would love to be one of Michael Vick's pugilists.

This week's films both imagine a world in where humans, not dogs fight each other — some to earn a hefty paycheck, and some just to stay alive.

DOA: Dead or Alive
The DOA video game franchise has been very successful over the years on the Xbox, combining acrobatic fighting (or beach volleyball) with sexy lady pixels. Seeing how nearly every other video game has been turned into a movie, it's about time that this series received the treatment.

In Dead or Alive, a group of skilled fighters from all around the globe are summoned to a remote island to compete in a fighting tournament, with the promise of a $10 million pay day for the winner.

Recent Emmy winner Jaime Pressly (“My Name is Earl”) stars as Tina Armstrong, a pro-wrestler who is out to prove she is no phony. She shows she certainly isn't by single handedly taking out a gang of pirates, and also defeating her own father (played by pro wrestling star Kevin Nash) in a tournament fight.

Also competing in the tournament is Kasumi, a princess who is looking for her lost brother, Christie, a thief/assassin, and Helena, a roller skater whose father came up with the DOA concept.

After Helena's father dies, the tournament is taken over by Donovan (Eric Roberts), a megalomaniac who plots to steal the combined powers of all of the tournament combatants.

While this may seem like heavy-duty material, the film is full of lighthearted moments. What other fight film would feature a five-minute beach volleyball game in the middle, even if it were integral to the plot?

Dead Or Alive is a wonderful combination of Charlie's Angels, anything starring Bruce Lee, and a late night infomercial for a singles chat line.

The Condemned
Over the years, numerous pro-wrestlers have made the leap to the big screen, including Andre The Giant, Hulk Hogan, “Rowdy” Roddy Piper, and the aforementioned Kevin Nash, just to name a few. The amazing thing is, it's always been a remarkably smooth transition. Not a bad film in the bunch. I haven't quite figured out why anyone would consider making a film that wasn't headlined by a WWE superstar. You're going to tell me that Kevin Spacey is more marketable than Kamala, the Uganda Headhunter?

Well, the biggest star ever in the rasslin' business, “Stone Cold” Steve Austin has finally made the transition from the ring to the Hollywood. 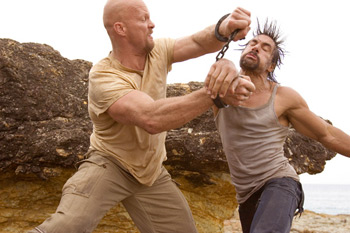 In The Condemned, Austin, plays a death row inmate who is given a one-in-ten chance to go free. The only problem is that he is given a nine-out-of-10 chance of dying.

Several inmates are summoned from across the globe to a remote island (I could swear I just typed that) by a manipulative reality television producer. These inmates are forced to kill each other off until one man (or woman) remains, while millions watch the action over the Internet.

We learn that Austin's character did not commit the crimes he was accused of, and cheer him on as he opens up a can of whoop ass on everyone in his way — he may just even get his hands on that evil producer. Of course I can't say for certain that he does, or even if he lives, as I wouldn't want to spoil the film for you.

I tend to judge the quality of a movie based on how many people explode during the film. Based on that criterion, The Condemned is a masterpiece.

I wholeheartedly recommend both of these films. While they both deal with similar themes, DOA takes a more lighthearted approach, while The Condemned is a far darker film. I would not be surprised if this coming March, we see another fight — The Condemned and DOA battling it out for the Best Picture Oscar.
Movies Movie reviews

1
Polaroid: Say cheese and die?
2
Netflix Fix of the Week: To All the Boys: P.S. I Still Love You
3
Home Alone For Christmas
4
Practical film effects deliver an authentic film experience
5
Eli: An Unexpected Thriller